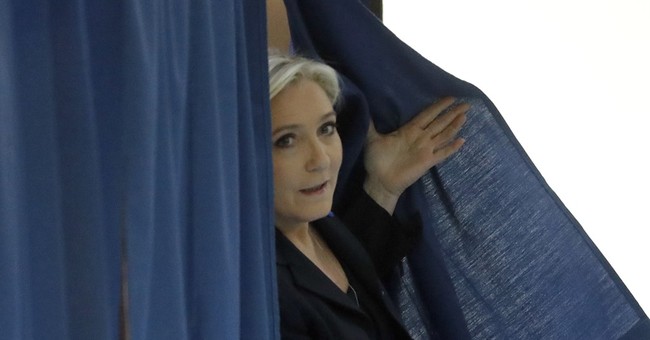 In the first round of voting in the 2017 French presidential election, En Marche! progressive candidate Emmanuel Macron came away with 24 percent, and the Front National's "far right" Marine Le Pen grabbed 22 percent, with 50 percent reporting. The numbers guarantee them both a spot in the runoff.

In a speech following the results, a confident Le Pen told her supporters that France's "survival" is at stake.

France's "survival is at stake," says Marine Le Pen who's projected to be in the #FrenchElection 7 May run off
https://t.co/abpe65g9q5 pic.twitter.com/O1wQu39ZKe

It's time, she said, to get rid of the "arrogant" people in the government who want to dictate to the people and usher in a new era.

"I am the candidate for the people," she said.

Many pundits have made parallels between Le Pen and candidate Donald Trump's campaigns. Both candidates' supporters garnered a severe distaste for both the political elite and the media in their respective races. Like Trump, Le Pen has also been attacked as "racist" for her right of center views.

The second round of the French presidential election will be held May 7.

Before then, take note of this interesting tidbit, via The Associated Press.

For the first time in modern French history, no mainstream party candidate is advancing, upending the country's political system.