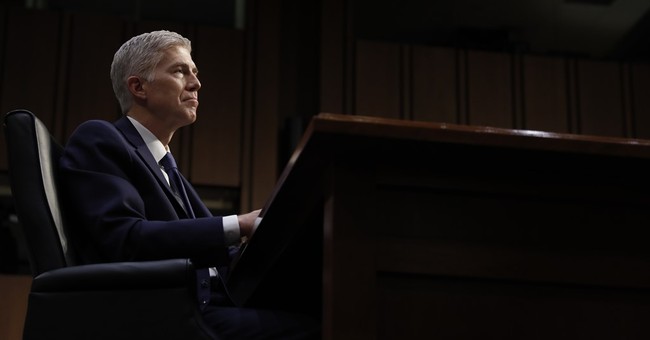 After listening to the members of the Senate Judiciary Committee both praise and condemn his judicial record for hours, Supreme Court nominee Neil Gorsuch finally had the opportunity to offer his opening remarks at his first confirmation hearing on Monday.

The Colorado judge first thanked the dozens of senators he’s met since arriving on Capitol Hill for their “warm welcome and wise advice” throughout the nomination process. He also thanked his family, particularly his wife, as he paused to give her an emotional hug.

If confirmed, Gorsuch pledged to be a “faithful servant” to the Constitution.

“I believe that the rule of law in this nation is truly a wonder,” he said. “It’s no wonder it’s the envy of the world.”

The nominee went on to tout his impressive record. In the 2,700 appeals decisions he's been a part of, Gorsuch has been in the majority 99 percent of the time. He’s learned to “cherish” each judge’s viewpoint and treat everyone with respect, having served with judges appointed by Obama and all the way back to President Johnson.

He never rules based on the people in the courtroom, but the law.

“A good judge should guarantee no less,” he said.

A judge that likes every case he hears is “probably not a very good judge” because he or she is stretching for outcomes they prefer, Gorsuch added.

The hearing was largely a bipartisan affair. Not only were two of his witnesses Democrats, but Gorsuch noted that hundreds of both liberals and conservatives sent letters to the committee on his behalf.

Gorsuch lightened up the room at one point by practicing a bit of self-deprecating humor.

“As my daughter reminds me, putting on a robe does not make me any smarter,” Gorsuch said, before recalling the time he tripped on the hem of his robe.

The first round of questioning from the Senate Judiciary will begin Tuesday at 9:30 a.m.