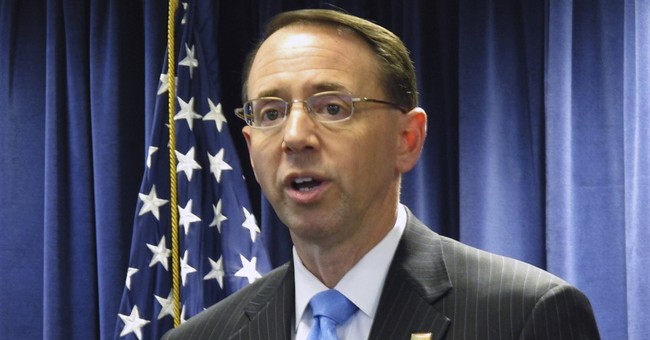 Deputy Attorney General Nominee Rod Rosenstein sat before the Senate Judiciary Committee on Tuesday for his confirmation hearing. The questions had a theme: Russia.

Not that it was unexpected. With Attorney General Jeff Sessions’s recusal from the investigation into Russia’s supposed interference in the 2016 presidential election, Rosenstein would be the go-to guy as the probe gets underway.

The very first question for Rosenstein, who is the Maryland U.S. attorney, came from Sen. Chuck Grassley and it was clear he was eager to get something out of the way.

“Have you ever met representatives with the Russian government?” Grassley asked.

It was imperative for Rosenstein to be as transparent as possible in terms of his meetings with Russia because Sessions got into hot water when he failed to mention he met with the Russian ambassador twice during the 2016 campaign during his own confirmation hearing.

“I know this is the issue du jour,” Rosenstein said of the Russia controversy. Yet, if he is confirmed as deputy attorney general, he would approach the investigation the same way he has prior ones in the past 27 years he's served as a prosecutor – he would evaluate the facts and the laws, and consult with career professionals.

That answer was apparently insufficient for Democrats on the committee, who consistently asked him if he planned to appoint a special prosecutor to conduct the Russia probe. He said he has not yet communicated with career professionals in the Justice Department to adequately make a decision.

Sen. Dick Durbin (D-IL) then asked Rosenstein several questions he says Sessions refused to answer at his hearing. Would he pledge to not shut down any probe on foreign interference into U.S. elections and, if appropriate, would he release any conclusions from the investigation to the American public?

Rosenstein assured Durbin he would, on both counts.

The senator also wanted assurance that Rosenstein would not discuss the Russia investigation with Sessions. The deputy AG nominee agreed, adding that he presumed the attorney general consulted with professionals when he announced his recusal.

Some Democrats are refusing to budge on the special prosecutor. Sen. Richard Blumenthal (D-CT), for instance, threatened to block Rosenstein’s nomination if he doesn’t commit to appointing an independent counsel to lead the campaign probe.

Grassley, reacting to the Democrats’ calling for a special counsel into the Russia investigation, noted a double standard was at play. Where were these demands when Attorney General Loretta Lynch engaged in conflicts of interest during the FBI investigation into Hillary Clinton's emails?