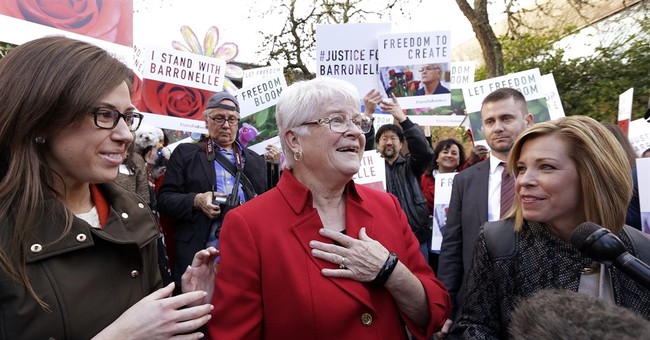 The Washington State Supreme Court has ruled unanimously against florist and grandmother Baronelle Stutzman in the closely watched religious freedom case of State of Washington v. Arlene’s Flowers and Ingersoll v. Arlene’s Flowers. In its ruling, the court said that Stutzman and her small business, Arlene's Flowers, was guilty of "sexual orientation discrimination."

Stutzman explained in an op-ed this November that she and the plaintiff, Rob Ingersoll, had been friends for years and she never refused his design requests – until he asked her to create floral arrangements for his nuptials. She argued that the First Amendment’s Free Speech Clause and Free Exercise Clause gave her the right to decide not to design for the gay couple. She asked the court to uphold her constitutional rights.

“The state is trying to use his case to force me to create artistic expressions that violate my deepest beliefs,” she said at the time.

It wasn’t a question of why she wouldn’t design for his wedding it was that she couldn’t.

Stutzman's attorney, Alliance Defending Freedom Senior Counsel Kristen Waggoner, said this court defeat is a painful slap in the face to the Constitution.

“It’s wrong for the state to force any citizen to support a particular view about marriage or anything else against their will," Waggoner said. "Freedom of speech and religion aren’t subject to the whim of a majority; they are constitutional guarantees.”

Stutzman will appeal the case to the Supreme Court.