Intel Chief Clapper on Leaked Dossier: It Wasn't Us 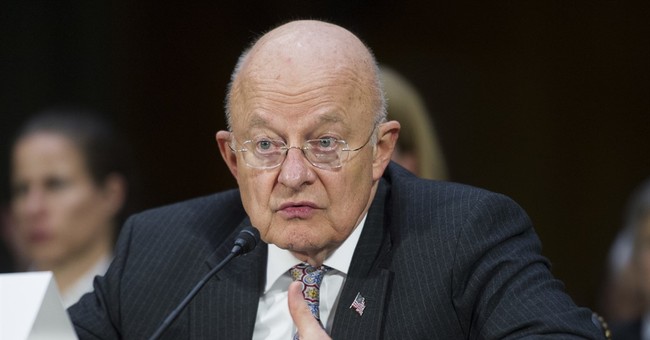 President-elect Donald Trump accused the intelligence community of taking a page out of Nazi Germany’s playbook by leaking the fictitious dossier that BuzzFeed published earlier this week. The report claimed that Russia had compromising information on the incoming president, but the contents were unsupported. At a press conference on Wednesday, Trump said the leak was not only immoral, but illegal.

James Clapper, however, insists it wasn’t them. The director of national intelligence released a statement on Wednesday pleading the agencies’ innocence.

This evening, I had the opportunity to speak with President-elect Donald Trump to discuss recent media reports about our briefing last Friday. I expressed my profound dismay at the leaks that have been appearing in the press, and we both agreed that they are extremely corrosive and damaging to our national security.

We also discussed the private security company document, which was widely circulated in recent months among the media, members of Congress and Congressional staff even before the IC became aware of it. I emphasized that this document is not a U.S. Intelligence Community product and that I do not believe the leaks came from within the IC. The IC has not made any judgment that the information in this document is reliable, and we did not rely upon it in any way for our conclusions. However, part of our obligation is to ensure that policymakers are provided with the fullest possible picture of any matters that might affect national security.

President-elect Trump again affirmed his appreciation for all the men and women serving in the Intelligence Community, and I assured him that the IC stands ready to serve his Administration and the American people.

James Clapper called me yesterday to denounce the false and fictitious report that was illegally circulated. Made up, phony facts.Too bad!

BuzzFeed has faced bipartisan criticism for publishing a report they knew was untrue. Even MSBNC anchor Chuck Todd asked the editor-in-chief why they would publish fake news.