Sessions Lays Out His Priorities For the Justice Department 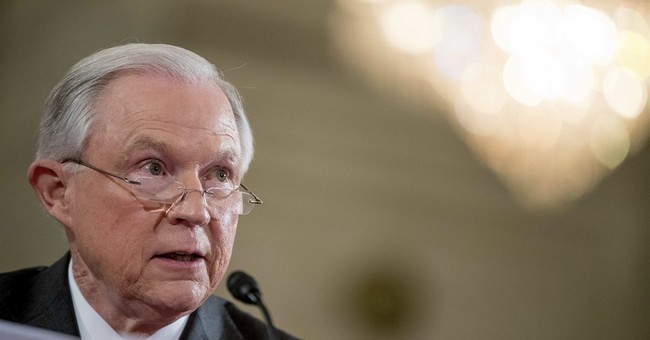 Sen. Jeff Sessions (R-AL) had the task of defending his record against a flurry of character assaults at his first confirmation hearing to be attorney general on Tuesday. Several of his Democratic colleagues suggested he had a history of discriminatory behavior, while protesters in the room cut to the chase, shouting that he was a "racist" and dressing as members of the KKK. After Sessions effectively disputed these attacks, his interrogators wondered whether he would be able to say “no” to President Donald Trump if he wanted him to take unconstitutional actions.

Sessions thanked the president-elect for his trust in nominating him, yet made clear that he would distance himself from the president as attorney general should he disagree with the executive branch’s agenda.

The attorney general “must be committed to following the law,” Sessions noted. He or she “cannot be a rubber stamp of president.”

One of Sessions’ top priorities will be to restore the morale of our nation’s police departments. The law enforcement in this country has been “unfairly maligned” in recent years, Sessions regretted. Morale in our police departments has suffered and they feel targeted, he continued.

It’s a “wake up call” that our men and women in uniform “must know they’re supported.”

Sessions also made clear he intends to defend America’s most vulnerable communities. He plans to make sure every eligible voter has access to the ballot and “ensure the integrity of the electoral process.”

In addition to protecting the maligned, he also intends to protect the U.S. treasury from waste and fraud and ensure we have a detailed protocol in place to protect our cyber security, especially in light of recent hacks during the 2016 election.

“I will make sure laws are enforced faithfully,” he said in summary to his Senate colleagues.