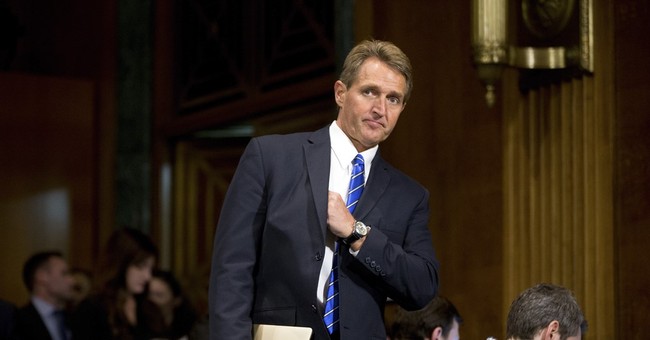 Sensing a Hillary Clinton presidency is inevitable at this point, Sen. Jeff Flake (R-AZ) is urging his colleagues to forward the Supreme Court nomination process before she enters the White House. President Obama's choice in Merrick Garland would be far better than any liberal justice Clinton requests, he argues.

"I said if we were in a position like we were in in '96 and we pretty much knew the outcome that we ought to move forward. But I think we passed that awhile ago," Flake said. "If Hillary Clinton is president-elect then we should move forward with hearings in the lame duck. That's what I'm encouraging my colleagues to do."

Yet, Sen. Chuck Grassley (R-Iowa), chairman of the Senate Judiciary Committee, is refusing to hold a vote.

The Supreme Court is a significant factor in this year’s election. It was the very first thing the presidential nominees discussed at the debate in Las Vegas this week. Their visions for the court could not be more opposite. Donald Trump talked about appointing pro-life justices who will rule through a conservative bent, while Hillary Clinton spoke of the need to defend Roe v. Wade.

While Garland is not exactly a conservative hero (gun rights activists has some serious concerns) he is more middle-of-the-road than other potential candidates expected to be appointed by a Democrat. Should the GOP just take their chances with him?