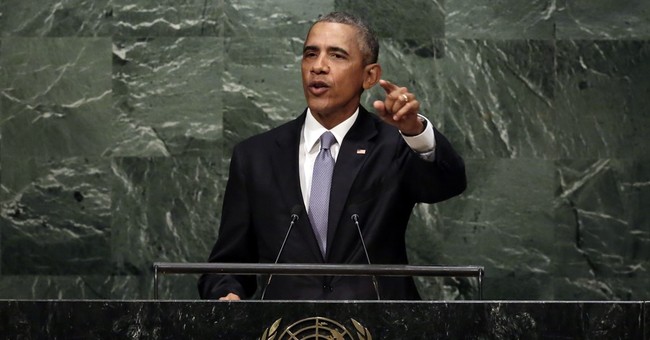 Shortly before authorities caught 28-year-old Ahmad Rahami, the man behind this weekend’s bombings in New York and New Jersey, President Obama offered a brief statement on the terror that struck the area and left dozens wounded.

“As Americans, we do not, and never will, give in to fear.” —@POTUS on the New York and New Jersey explosions https://t.co/AUUe1SnvXu

“We are extremely fortunate and grateful that nobody was killed,” the president said, speaking at the United Nations General Assembly in New York City. “Our prayers go out to all of those who have been injured.”

The president continued by asking Americans not to let this incident cause them to give in to the fear being stoked by violent extremists.

"They are trying to hurt innocent people, but they also want to inspire fear in all of us and disrupt the way we live," he continued. "We all have a role to play as citizens in making sure we don't succumb to that fear."

He also commended police and first responders and told citizens in New York and New Jersey:

“If you see something suspicious, say something.”

That advice appears to have worked in Linden, New Jersey, where witnesses told police they saw a suspicious man sleeping outside a local bar. The police followed these tips, reportedly found the suspicious man to be Rahami and took him into custody after a shootout.