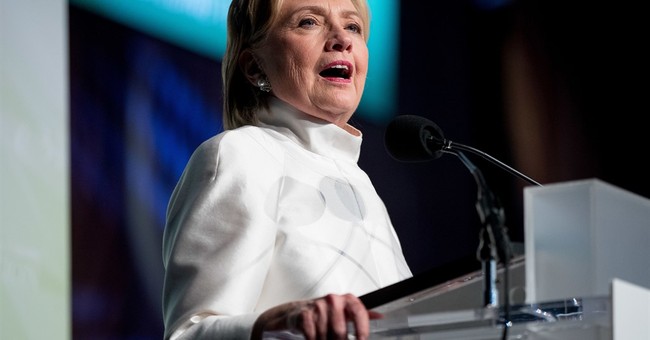 Democratic nominee Hillary Clinton seemed to have more anger for Donald Trump than the acts of terrorism that occurred over the past 48 hours during her press conference Monday morning from White Plains, NY. In that speech, she spent a lot of time rebuking her opponent for his politically incorrect messaging, claiming it has only aided and abetted the terrorists.

"[T]he kinds of rhetoric and language that Mr. Trump has used is giving aid and comfort to our adversaries," the Democratic nominee said in a press conference, citing similar remarks by the former head of the National Counterterrorism Center, Matt Olsen.

"[W]e know that Donald Trump's comments have been used online for recruitment of terrorists. We've heard that from former CIA Director Michael Hayden, who made it a very clear point when he said Donald Trump is being used as a recruiting sergeant for the terrorists," Clinton said.

Clinton spewed a similar narrative earlier in the campaign, arguing Trump's rhetoric was being used in ISIS recruitment videos. PolitiFact initially rated the statement false, then changed it to true months later after reportedly finding new evidence to support her claim.

Whether or not terrorists are using Trump's words to boost their own efforts should not be a condemnation of the Republican or disqualify him from office. We cannot hold him responsible for terrorists' savage efforts.

In her Monday speech, Clinton also tried to argue that the refugee crisis is not as big a crisis as one may think. After all, the September 11 attacks were not committed by refugees.

The good news, of course, is that authorities have captured the suspect behind this weekend's bombings.