Perkins: A Postcard From Trump Would've Been More Than Obama's Response to Louisiana 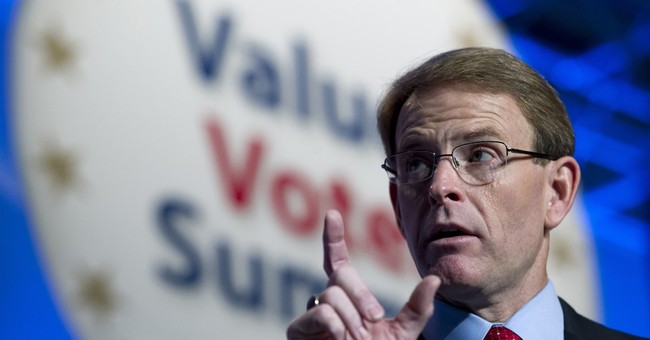 Tony Perkins, the president of the Family Research Council, has been directly affected by the devastating flooding in Louisiana. His home was destroyed and his family was forced to escape via a canoe. Thankfully, everyone is now safe. During his appearance on "Fox and Friends" Friday morning, Perkins called out President Obama for not learning from President Bush's response to Hurricane Katrina.

Meanwhile, he applauded GOP nominee Donald Trump's decision to cancel some Friday campaign events to travel to Louisiana. He could have just sent a postcard and it "would have been more than President Obama has done," Perkins noted.

.@tperkins: I thought Pres Obama would come to Louisiana in light of all the criticism Pres Bush receivedhttps://t.co/iOi2pB3DSq

In 2005, President George W. Bush was skewered for what many considered an insincere reaction to Hurricane Katrina. In particular, critics pointed out how he flew over New Orleans on his flight back to Washington, D.C., before eventually traveling to the devastated city. Then, Rapper Kanye West infamously said "President Bush doesn't care about black people" on live TV.

Yet, in August 2016, after President Obama's muted response to the Louisiana flooding, no Kanye West moment for Obama, as it's become all too clear the mainstream media has little to say about Obama's choice to remain on vacation in Martha's Vineyard and play golf instead of catching a flight to Louisiana.

That doesn't mean the president has been completely shielded from criticism. A Baton Rouge-based newspaper called The Advocate blasted the president for his prioritizing a Hillary Clinton fundraiser over the flood victims.

And if the president can interrupt his vacation for a swanky fundraiser for fellow Democrat Hillary Clinton, as he did on Monday, then surely he can make time to show up for a catastrophe that’s displaced thousands.

On "America's Newsroom" Friday morning, Eric Trump said it's "disgusting" that President Obama is at Martha's Vineyard playing golf while caskets are floating down the streets of Louisiana.