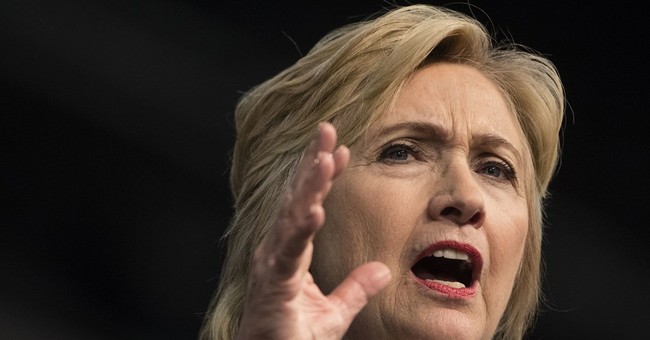 Democratic presidential nominee Hillary Clinton mourned the police officers slain in both Dallas and Baton Rouge this past week during her speech at the NAACP conference in Cincinnati, Ohio on Monday.

Then, after her call for unification, Clinton proceeded to criticize America's police for their supposedly unfair targeting of African Americans.

African Americans are killed by police "more than any other group," she said to the NAACP audience. Additionally, the demographic is "charged with crimes and sentenced to longer prison terms than white men convicted of the same offenses."

It is "profoundly wrong," she said. "We can't ignore that away."

We have to make it right, she suggested, with "end-to-end reform." In particular, she called out the Ferguson police force as one in need of serious accountability. She also demanded we require accurate data on custody deaths, increase training, establish clear national guidelines on the use of force - especially lethal force - and support independent investigations of fatal encounters with the police.

"I will start taking action on day one until we get this done," she promised. "When the 24-hour news cycle moves on, I won't."

“It can only happen if we build trust and accountability,” she insisted. “That gets harder every time someone else gets killed.”

Clinton's rhetoric is reminiscent of President Obama's politicized remarks at the Dallas interfaith service last week. In his speech, he felt it was the right time to promote gun control and the Black Lives Matter movement.

GOP nominee Donald Trump was also invited to speak at the NAACP conference, but declined the request due to schedule concerns during the RNC convention.