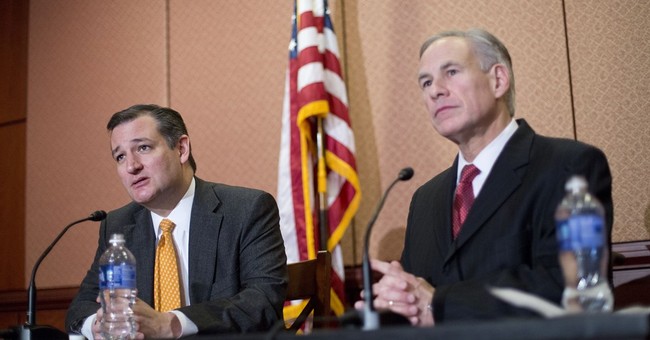 Texas Gov. Greg Abbott (R) knows better than to expect a stellar outcome in Texas v. United States. With Justice Antonin Scalia’s passing, who was the conservative lion of the court, Abbott has admitted that a 4-4 split decision is the best he can hope for to derail President Obama’s executive action on immigration. At a Heritage Foundation event on Thursday, the governor unloaded on how the court has devolved to partisan politics and therefore threatened America's national fabric.

“Because politics is being played at the United States Supreme Court, I think the best we can hope for is a 4-4 split decision, the consequences of which will mean that we will win, but it will not be a broad-based application across the United States affirming the principle that the president does not have the unilateral authority to rewrite the law,” Mr. Abbott said.

Obama’s Deferred Action for Parents of Americans would allow 4 million illegal immigrants to avoid deportation and the Deferred Action for Childhood Arrivals would offer work permits to illegals who entered the country before they turned 16. In 2014, Gov. Abbott led the effort to sue the administration for what he viewed as an unconstitutional action. An additional 25 states eventually joined him in his challenge.

The governors had high hopes, considering the makeup of the court favored their efforts. Yet, Scalia’s absence will likely force the court to a stalemate.

This was evident on Monday, when the court heard oral arguments in the case. The justices and witnesses went back and forth over the legality of the president’s action and whether it was more important to show compassion toward “undocumented citizens.”

A 4-4 vote would halt the president’s amnesty, yet wouldn’t go as far as Abbott would have liked.