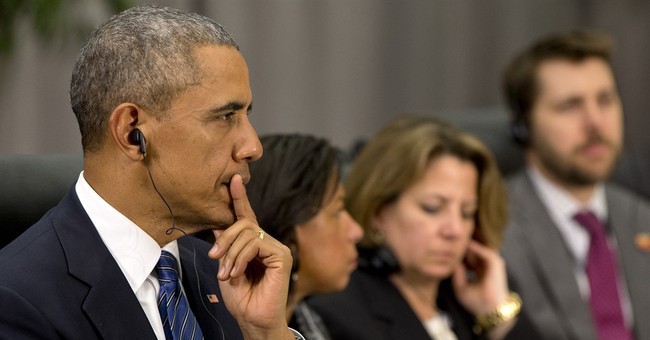 It’s President Obama’s last Nuclear Security Summit in Washington and, judging by his rhetoric on Friday, he seems pretty pleased with his efforts to halt Iran’s nuclear aims. The nuclear deal he signed over the summer is apparently working splendidly.

"After nearly two years of intensive negotiations and strong sanctions, the countries represented in this room achieved what decades of animosity and rhetoric did not: a long-term deal that closes off every possible path for Iran to build a nuclear weapon and subjects Iran to the most comprehensive nuclear inspections ever negotiated," Obama said.

Obama left out the part where Iranian Supreme Leader Ayatollah Ali Khamenei said just this week that his nation is not going to abandon its ballistic missile program. It was one of several indications Iran is not ready to play nice with the United States and Israel. Remember when they captured 10 of our U.S. sailors and held a parade to celebrate?

The president noted that the agreement does not solve all problems in the region, but insists it has placed a major obstacle in Iran’s path to a nuclear bomb, calling it a “success of diplomacy.”

"This is a success of diplomacy," says Pres Obama of Iran nuke deal. Says it has "achieved a substantial success." pic.twitter.com/Ip3gs90QZv

If he truly believes that, he might want to work on his argument. Remarks like this aren’t likely to comfort critics.

Pres Obama hails Iran Nuclear Agreement as "historic." Even if Iran cheats, he says it would now take a year for Iran to make a nuke weapon.

Arms control activists see through the president’s all talk, no action policies that do nothing to halt an international arms race.

"I have a hard time calling this a nuclear security summit," said Bruce Blair, a former Air Force nuclear launch officer who co-founded Global Zero, an international movement seeking the elimination of nuclear weapons that was fueled by Obama's Prague speech. "The Prague vision has been just empty calories."

Other critics point to the fact that Obama has not helped to decrease any of the world’s 200,000 nuclear weapons in the form of highly enriched uranium.

While the president pats himself on the back, our enemies are giving themselves high fives.