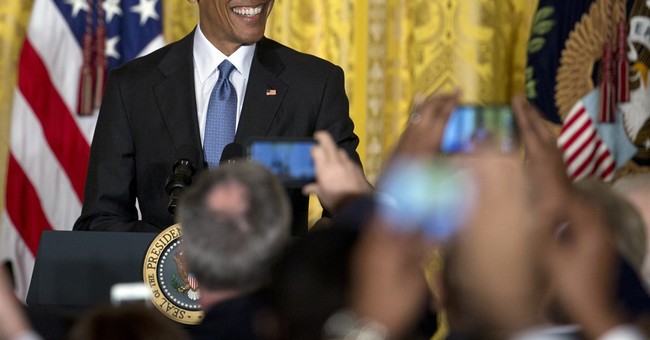 Someone has apparently been telling Hillary Clinton to link arms with President Obama during the 2016 presidential race. The former secretary of state has refused to distance herself from the president and his policies on the campaign trail, despite the fact that Americans are increasingly disenchanted with his failed agenda.

For instance, Clinton has praised Obamacare, insisting Democrats can’t give up on the president’s momentum. Yet, in June an Obamacare poll showed that 54 percent of Americans disapprove of the law, which has forced millions of people off their insurance plans, raised premiums and caused out-of-pocket costs to skyrocket.

Obama has returned the favor at times, praising Clinton as a “good, smart, tough person who cares deeply about this country” in a recent interview with Politico. Although in the same conversation he also complimented Sanders and called Clinton a bit “rusty.”

The lovefest between Obama and Clinton continued during a campaign event in Deocorah, Iowa on Tuesday. When a voter asked Clinton if she would consider appointing Obama to the Supreme Court as president, she marveled at the thought:

"Wow, what a great idea. No one has ever suggested that to me, I love that, wow," the Democratic presidential candidate responded. "He may have a few other things to do but I tell you that's a great idea."

Clinton touted his experience as a law professor and intellectual acumen as proof he’d fit well into those black robes.

As for how Obama feels about serving on the bench, a couple of years ago he told The New Yorker that, while he enjoys solving judicial problems, he wants to escape the Washington bubble.

Question: Is Hillary hurting or helping herself by putting the president on such a high pedestal?