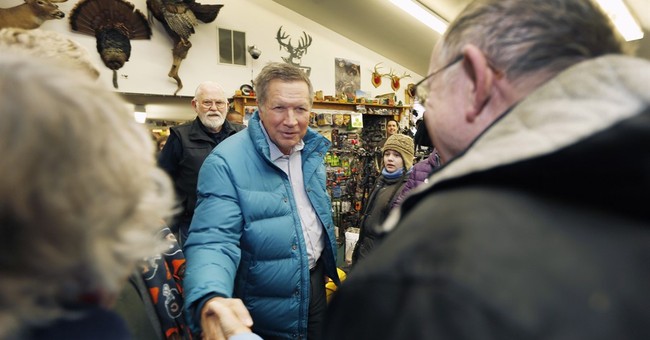 New Hampshire has offered some surprises in both 2016 primary battles. While Bernie Sanders enjoys a 27-point lead in the Granite State, Ohio Gov. John Kasich, an underdog in the Republican race by any measure, has come in second in a new poll. Second only to who else – Donald Trump.

The surprising American Research Group poll shows Kasich with 20 percent of the vote in New Hampshire. Trump holds steady at number one with 27 percent.

With only three weeks to go until primary day, Kasich seems to be surging at the right time. But, groups like the American Principles Project (APP) would argue it’s the wrong time. Kasich’s shaky conservative record should worry voters, they insist.

The organization highlights some areas of concern: Kasich supports Common Core more than any other GOP candidate. On the issue of marriage, he has told conservatives to “move on” and has indicated he will not bend over backwards to defend traditional values. Abortion, an increasingly important issue to voters, especially in light of the Center for Medical Progress’ video investigation into Planned Parenthood, is a topic Kasich said Republicans “focus too much” on.

Overall, he received an “F” from APP.

In a new statement, APP President Frank Cannon responded to Kasich’s momentum out of fear for the future of social conservatism:

"If Marco Rubio finishes third or worse in Iowa, and if John Kasich emerges as a strong second place or even the winner of the New Hampshire primary, things will get very interesting very quickly," Cannon said. "In that scenario, Kasich could easily become the de facto establishment candidate, a mantle that Bush and Rubio have both struggled to seize. This should concern social conservatives greatly, as John Kasich is no friend to our movement."