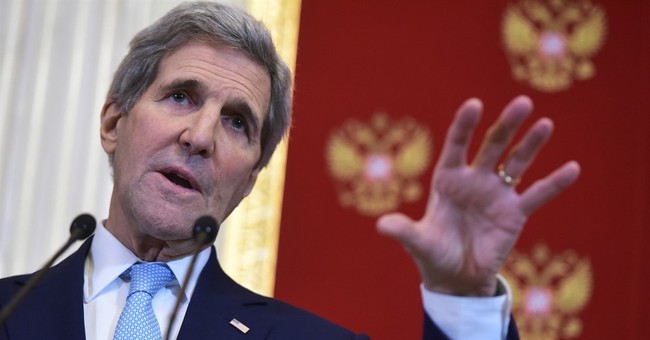 The State Department continues to live in an alternate universe. One day after the agency received criticism for claiming it is successfully “bringing peace” to Syria, Secretary of State John Kerry wrote in a Boston Globe op-ed that of all the achievements of 2015, he is most proud of the historic climate deal reached in Paris.

Of these, none is more important than the recent global agreement in Paris to prevent the most harmful impacts of climate change. Earlier negotiating efforts had failed because of divisions between industrialized and developing nations. By reaching out to China, the world’s leading emitter of greenhouse gases, and by emphasizing the incredible economic potential of clean energy technology, we were able to secure an agreement that sends the right message to all. We have a shared responsibility now to sustain the momentum generated in Paris, so that the targets established there are considered not a ceiling on what we can accomplish, but rather the platform upon which we can make further gains.

The Obama administration’s priority on battling climate change while the world faces the growing threat of terrorism has irked Americans for the past seven years. A new Gallup poll revealed that the public named terrorism as the number one issue in the country. An even newer survey showed Americans believe the terrorists are winning. Yet, Kerry is apparently more worried about greenhouse gases.

At the end of his op-ed, Kerry seemed to contradict his own agency by writing, “The obstacles to peace in Syria remain daunting.” The department recently claimed it is well on its way to “bringing peace” to Syria. They felt so confident about it that they included it on their 2015 list of accomplishments.

For the country’s sake, I hope Kerry and his department learn to get their priorities straight.