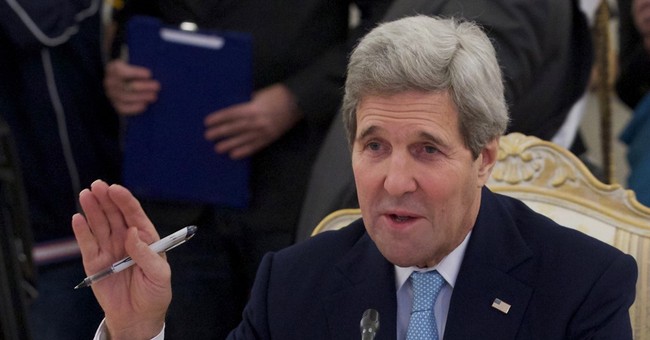 Last week, the State Department gave itself a pat on the back for "bringing peace and security" to…Syria. The announcement was part of the agency’s year-end review, where it listed its top foreign policy achievements of 2015.

Syrians are in their fifth year of a civil war that has caused thousands to flee their shores, inundating Europe and America through desperate refugee programs. How then, does the department explain its choice to congratulate themselves on their work in Syria?

It is justified by the tense they used, according to State Department spokesman Mark Toner.

"The operative word there is 'bringing,' not brought," Toner told reporters.

"So we're bringing peace and security to Syria, I think that is a truthful claim," he added. "There has been significant process, we believe, in the past year, on both fronts."

So, they are giving themselves credit for something that has yet to occur.

Nevertheless, Toner went on to defend the agency's efforts, remarking that they have succeeded in garnering cooperation from the international community as to how best to proceed with the political process in Syria. He also heralded the UN Security Council Resolution that is expected to usher in a more credible government that answers to the people.

Some of the other “accomplishments” the State Department named raise red flags too. For instance, the global climate change agreement reached in Paris, and the White House’s nuclear agreement with Iran, which most Americans want nothing to do with.

I imagine if the public came up with their own year-end review of the agency, it would look much different than this far-fetched list.

As for the Syrian civil war, there is “no end in sight,” reports The Independent.