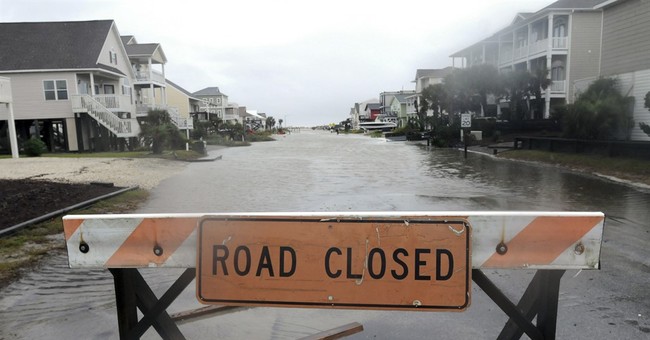 Gov. Nikki Haley (R-SC) held a somber press conference Monday to address the frightening situation in her state as South Carolina enters its third straight day of flooding. Weather-related events, she said, have now claimed nine lives across the Carolinas.

South Carolina has already received 50 percent of its annual rainfall, Haley said. It is the worst flooding in the state’s history. While Hurricane Joaquin seems like the obvious source of the devastating floods, CNN reports it may be more complicated than that:

The low pressure area associated with the rain soaking the Carolinas is funneling heavy tropical moisture into the region, creating the torrential rainfall, the CNN Weather Center said.

While Hurricane Joaquin is predicted to miss the U.S., water connected to the storm is feeding torrential rain on the East Coast.

The moisture the storm is pulling in is also associated with Hurricane Joaquin, but the two systems shouldn't be confused.

Haley said she was late to today’s presser because she had just got off the phone with President Obama, who she said was “extremely gracious” in his comments and “concerned” about the life-threatening situation her citizens are facing.

Some positive news: National Guardsmen and water rescue teams have worked together to make over 150 rescues and the rain is expected to stop soon.

Yet, the flooding will persist. To avoid any more tragic casualties, Haley plead with her state to avoid the elements at any cost: