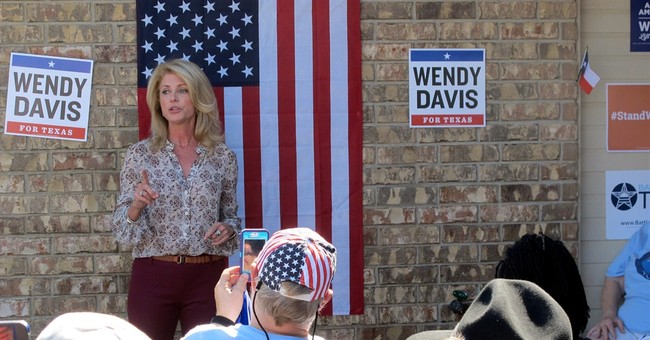 Former Texas State Senator Wendy Davis's crushing defeat to Governor Greg Abbott last November wasn't the end of her embarrassing woes it appears. During her Senate re-election campaign in 2012, reports suggested that Davis had failed to disclose that her law partner and executive director of her law firm were lobbyists. Those legal troubles have now caught up to her, according to the Texas Tribune:

The Texas Ethics Commission has fined former state senator and Democratic gubernatorial nominee Wendy Davis $5,000 after finding "credible evidence" that she failed to include her relationship with two lobbyists on financial disclosure forms filed during her 2012 senate re-election campaign.

Failing to report that she had a common interest in business with lobbyists was a violation of campaign ethics laws.

Shelton complained that Davis' personal financial documents for 2010 and 2011 did not properly indicate that her law partner, Brian Newby, was a registered lobbyist. The firm's unpaid executive director, Marcy Weldin Foster, was also a registered lobbyist in 2011, and that was not disclosed. The commission found Davis received fees for services from her own firm and another that she worked for "of counsel," Cantey Hanger, in 2010 and 2011. Both firms paid Newby as a lobbyist, and Cantey Hanger paid Foster as a lobbyist.

This better-late-than-never action by the TEC is another indication that justice can still be served against Davis's endless list of shameful behavior. Did she really think filibustering a bill that would save thousands of lives and exploiting her opponent's handicap in a distasteful campaign ad would win her the governorship?

Congratulations Senator, you're getting exactly what you deserve.