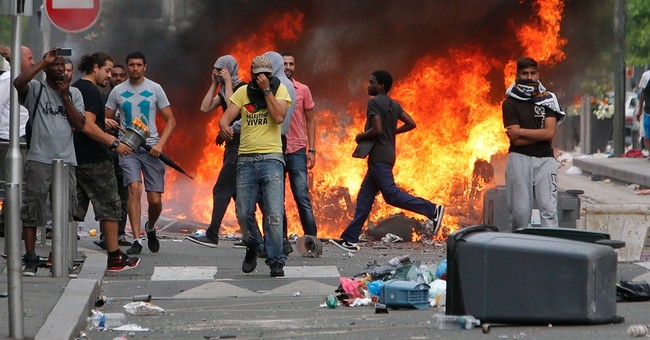 Sarcelles, France is a suburban city located just north of Paris. It is known as “Little Jerusalem” to Jewish residents, who say the community feels like home. Unfortunately, the neighborhood is now the latest victim of anti-Semitic rioting. This past week, despite a government ban on protests against the Israeli offensive in Gaza against the terror organization Hamas, pro-Palestinian protesters looted Jewish shops, set fire to automobiles and chanted “Kill the Jews” in the city that is supposed to celebrate Jewish culture.

The Huffington Post UK reported the violence, including horrid pieces of eyewitness news:

Eighteen people were arrested for attacks on shops, including a kosher supermarket, a Jewish-owned chemist and a funeral home. Rioters, who carried batons and threw petrol bombs according to eyewitnesses, were yards from the synagogue when they were driven back by riot police who used tear gas.

On Sunday, locals reported hearing another pleasant chant, "Gas the Jews," according to Huff Po.

This is just the latest bout of heinous behavior in the country home to Europe's largest population of Jews. Anti-Semites also recently stormed Paris synagogues.

French Prime Minister Manuel Valls has not been afraid to label the violence what it truly is:

"What's happened in Sarcelles is intolerable: attacking a synagogue or a kosher grocery is quite simply anti-Semitism, racism," he said.

Valls also said that Sarcelles had never before seen such violence, according to the BBC.

Some condemn Israel’s use of force against Hamas seemingly without taking into account Israel’s right to defend itself from terrorism.

Israeli Prime Minister Benjamin Netanyahu said something to this nature:

“There are some in the West who tell us, we support Israel’s right to defend itself … as long as you don’t exercise that right,” Netanyahu told Fox News. “Well what else could we do, what would you do … if 80 percent of your people were in bomb shelters?”

What’s more, while Israel has been willing to accept ceasefires, Hamas continues to reject them. A recently released CNN poll revealed that Americans are taking note of this, with 57 percent of respondents supporting our Middle Eastern ally’s use of force.

Nevertheless, anti-Semitic behavior continues to spread like wildfire, as more frightening protests also recently took place in London, Vienna and Berlin…and yes, even here in the US.