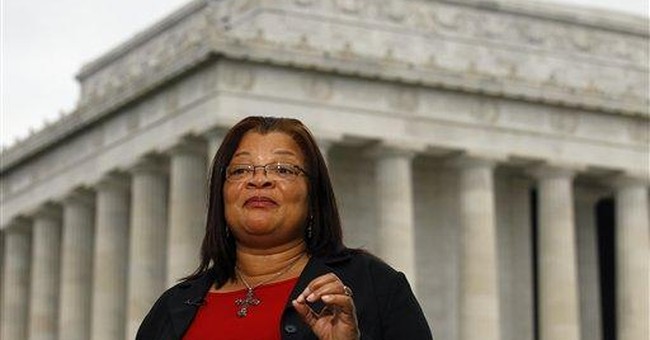 This week, a panel of black community leaders hosted a webinar decrying the ‘For the People Act,' along with the deceitful and harmful rhetoric Democrats have used to characterize the bill.

Presented by FreedomWorks, one of the nation’s largest grassroots organizations advocating for conservative principals, the six-person discussion focused on the panelist’s own lived experience with the horrors of Jim Crow, while also condemning HR 1 and the left’s dishonest presentation of the bill.

HR 1, or the ‘For the People Act’, has been presented to the American public as a civil rights bill aimed toward expanding voting and preventing the passage of many so-called voter restriction laws that are currently being proposed and adopted in states across the nation.

However, as each panelist pointed out, HR 1 does the exact opposite of strengthening civil rights protections, with one panelist going as far as to dub the bill the “Screw the People Act.”

Whether it’s the abolishment of voter ID laws, the legalization of ballot harvesting, or any number of other damning criticisms, HR 1 is not the civil rights bill that Democrats are currently attempting to sell to the American people.

Reverend C.L. Bryant, FreedomWorks’ Senior Fellow and host of the virtual gathering, began the seminar by pushing back against the fictional narrative the left Is attempting to create.

“When we look at HR 1,” said the reverend, “When we look at the lies that have been told about this particular bill … the most alarming thing to us, at this point in time, is the type of rhetoric and the type of definitions that they are presenting, not only to us but they're presenting them to our young people. And the narrative of that rhetoric is so false, that it is blatant, and it must be challenged.”

“These are people who have lived through that difficult times in this country,” said Rev. Bryant, speaking of the panelist’s personal experience with Jim Crow.

“And may I just say,” continued Bryant, “that the hypocrisy of Joe Biden to throw around the words, Jim Crow, as though he owns the black vote. I must say to us as black people, and I must say to us as Americans. When we look back over Joe Biden's track record, we will see a mass deception that is going on”

Dr. Carol Swain, a former Vanderbilt professor, and experienced political commentator, further demonstrated the ‘mass deception’ being proliferated by Democrats, reflecting on her own experience with systemic racism and the fight to overcome its devastating effects.

Former Louisiana State Senator Elbert Guillory echoed Dr. Swain's understanding of what discrimination and Jim Crow actually looked like, saying, “There's nothing like Jim Crow going on now, except what [Biden] is doing himself…. Jim Crow was a rough time. I have the scars on my back, not on my soul, from those days. Almost 200 arrests and police stops during the 1950s and 1960s.”

The renowned attorney went on to lament the disservice being done to the civil rights leaders who fought and died for progress, saying, “Unfortunately, when the president uses this term, Jim Crow, he drags through the mud history…It’s demeaning to the sacrifices of all of those civil rights warriors to have this term brandished about now.”

Emphasizing the dishonesty of his motives, Pastor Stephan Broden answered the question as to why President Biden is invoking such a terrible time in America’s past.

“The idea of Jim Crow-ism that's being brought into the public square,” said Pastor Broden, “is an attempt on [the president’s] part and the Democratic Party to evoke an emotional response on the part of the black community.”

Pastor Broden continued on to detail the historical practices of Jim Crow and highlighted the stark contrast between “a collection of state and local statutes that legalized racial segregation” and elections laws like Georgia’s that “clean up the election process and makes it constitutional. Bringing more opportunity… to minorities to vote in America.”

Responding directly to HR 1 and the dismantling of the American right to free and fair elections, former U.S. House of Representants candidate Claston Bernard offered his own personal take on the responsibility and privilege of being an American citizen.

“As an immigrant,” said Bernard, “I go back to the 14th amendment… If you're born or naturalized you're an American. That's an honor bestowed on people who are coming through this country that they need to understand and respect.”

Bernard went on to stress the danger of HR 1’s demolishing of American traditions, saying, “if you're telling me as an immigrant your laws and your constitution means nothing, then what would you expect? You will have is the same problems that they’ve had in Europe by opening the floodgates to illegal immigrants who will not come here and assimilated.”

The last of the six panelists to speak, beloved activist Dr. Alveda King, emphasized her faith and the need to fight back against the threat of HR 1 and Biden’s occupation of the White House.

“We have not lost,” says Dr. King, “We have won the battle. It belongs to us. Occupation looks like a war because the crooks come back in and try to take it back. They will try to take it by force, we must stand firm… but we must be guided by the hand of the Lord in Unity.”

As of today, the 'For the People Act' has passed in the House of Representatives along party lines, 220 to 210. The Senate has received the legislation and it now awaits processing and deliberation in the higher chamber.