Illegal Immigrants Amnestied By Obama Eligible For Up To $9,182 In Cash Benefits Every Year 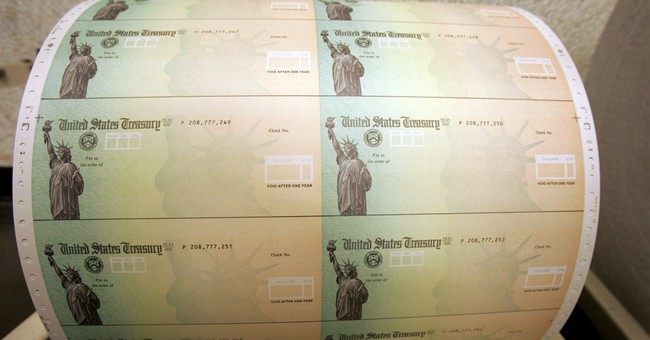 Illegal immigrants who are given work permits and Social Security Numbers through President Obama's amnesty programs could get up to $9,182 in cash benefits from the federal government every year, according to a new later from the Congressional Research Service.

Requested by an unnamed Senator, the CRS letter details the maximum Earned Income Tax Credit and and Child Tax Credit payments a family could receive from the Internal Revenue Service without paying any income taxes to the federal government.

Families with four children who earned $23,260 would owe zero income taxes in 2014 and would be eligible for a $9,182 check from the government since both the EITC and CTC are refundable benefit programs which pay recipients benefits above and beyond any tax liability they night have.

Families with incomes above $23,260 would still receive EITC and CTC payments from the federal government, but those payments would decrease as the families income rose.

Illegal immigrants who filed tax returns using Taxpayer Identification Numbers from the IRS have been receiving billions in CTC payments from the federal government for years. Obama's Deferred Action for Parental Accountability program would make it easier for millions more illegal immigrants to receive tax benefits by giving the SSNs.

With a SSN, illegal immigrants become eligible for both CTC and EITC payments. The Congressional Budget Office estimated that if Obama's executive amnesties are kept for the next ten years, illegal immigrants will receive more than $20 billion in EITC patients over that time.

According to the CBO, under Obama's amnesty programs, illegal immigrants would also get $3 billion in health care benefits, $2 billion in Supplemental Security Income, and $1.6 billion in food stamps.

When Obama first introduced his DAPA program to the American people, he claimed it would not "offer the same benefits that citizens receive."

These official CRS and CBO letters directly contradict that statement.