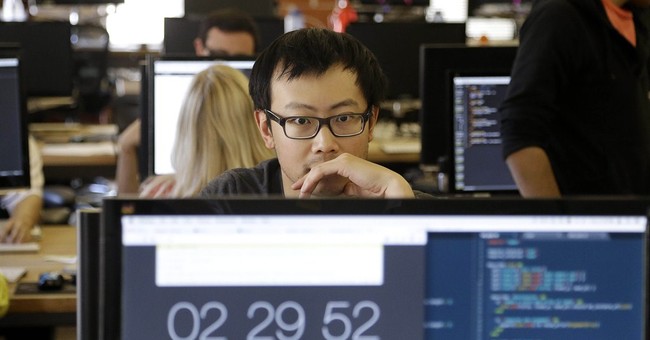 College tuition has increased 1,120 percent since 1978. American students have now racked up over $1.2 trillion in debt trying to pay for these higher tuition prices. Despite all this spending and debt, 53 percent of recent college grads are either jobless or underemployed, and twice as many college grads are working in minimum wage jobs today then five years ago.

Meanwhile, the federal government is making $40 billion a year off of its student loan business. If ever there was a sector of the economy that needed less government interference it is the higher education sector today.

Last week the Bureau for Private Postsecondary Education sent letters to more than half a dozen "coding academies" threatening to shut them down unless they started complying with state higher education regulations. Inside Higher Ed reports:

The startups -- which include places like App Academy, Dev Bootcamp, General Assembly, Hack Reactor, Hackbright Academy, and Zipfian Academy -- offer intensive, full-time, short-term training programs in computer languages and other programming skills designed to lead directly to jobs. The fees are often steep -- typically between $8,000 and $12,000 for a six- to 10-week course -- and are paid directly by the students, since the classes and programs (which do not award degrees) do not qualify for federal or state financial aid.

And these startup firms appear to be delivering results. Venture Beat reports that, "at Hack Reactor, where tuition costs over $17,000, 99 percent of students are offered a job at companies like Adobe and Google."

But none of that matters to the bureaucrats at BPPE who are demanding that the coding academies "must run any change in curriculum by the agency" and that all instructors must have three years of teaching experience.

Problem is, computer science is a fast paced industry and many coding academies change their curriculum every three weeks. Which is a problem since BPPE approval for curriculum changes often takes six months. Coding camp instructors also usually lack the three mandated years of formal teaching experience despite an average of 7-10 years experience in the industry.

"What that looks like and what makes sense for our schools is not necessarily going to fit in the current regulations,” Hack Reactor cofounder Anthony Phillips told Venture Beat.

Unless government gets out of the way, our higher education system will continue to fail both students and employers.