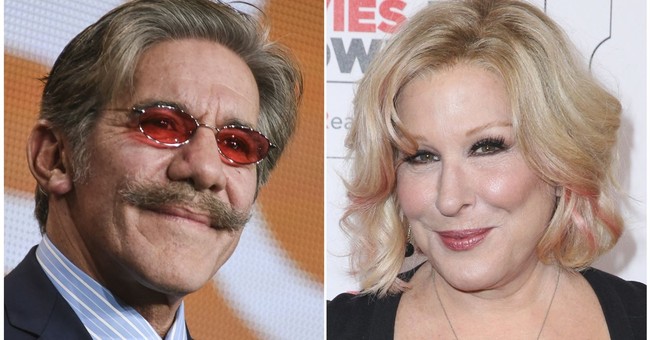 Geraldo Rivera tweeted an apology to actress Bette Midler after she posted a video of an interview from 1991 where she accused him of drugging her and groping her in the 1970s. Rivera said he recalled the incident much different than the way Midler does, but he still apologizes for his actions.

Although I recall the time @BetteMidler has alluded to much differently than she, that does not change the fact that she has a right to speak out & demand an apology from me, for in the very least, publically embarrassing her all those years ago. Bette, I apologize.

Here are Midler's earlier tweets. She first tweeted a "Me, too" message, saying that she has experienced either sexual harassment or sexual assault.

She followed that tweet up with this harrowing video clip, where in an interview with Barbara Walters, she said that Rivera and a producer pulled her into a bathroom, drugged her, and groped her. Midler chastised Rivera for apologizing for his tweets defending fired "Today" anchor Matt Lauer, but not for assaulting her in the 70s.

Tomorrow is my birthday. I feel like this video was a gift from the universe to me. Geraldo may have apologized for his tweets supporting Matt Lauer, but he has yet to apologize for this. #MeToo pic.twitter.com/TkcolFWfA2

Midler has not yet responded to Rivera.