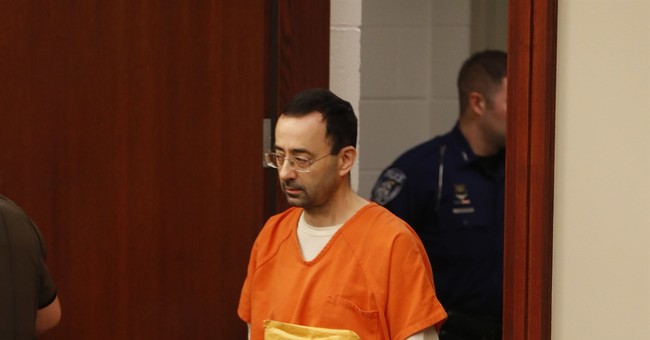 Dr. Larry Nassar, who was accused of sexually molesting hundreds of gymnasts, including Olympians McKayla Maroney, Aly Raisman, and Gabby Douglas, has pleaded guilty on Wednesday to a separate case involving the sexual abuse of three gymnasts at the Twistars USA Gymnastics Club in Lansing, Michigan. One of the girls was under the age of 13.

Nassar had previously pleaded guilty to possession of child pornography and to seven counts of first-degree criminal sexual conduct. At his second trial, he apologized to his victims and admitted that what he did was not a legitimate form of medical treatment.

Nassar molested the gymnasts under the guise of providing treatment for back or hip pain. He would insert his fingers inside them, without gloves, as part of the "treatment." Nassar had been affiliated with USA Gymnastics for over 30 years and traveled to the Olympics with the team from 1996 until 2012. He resigned in 2015, after a coach overheard an athlete (later revealed to be Raisman) discussing Nassar's conduct during a treatment session. The coach then reported her concerns to the authorities.

In October, Maroney shared her story of how she was abused by Nassar throughout her gymnastics career, including at the 2012 Summer Olympics in London. A month later, Raisman revealed that she too had been one of his victims, and just last week Douglas came forward with her own story.

Nassar will be sentenced in December for the child pornography charges. He's being sued in civil court by over 100 women.