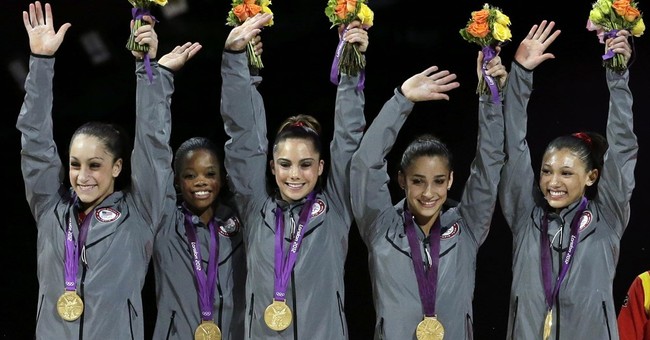 Olympian McKayla Maroney revealed in an emotional Twitter post on Wednesday that she was abused for years by former team doctor Larry Nassar. Maroney said the abuse began when she was 13 years old at one of her first National Team camps at the Karolyi Ranch in Texas, and that it didn't end until she stopped competing in 2013. She said that she was molested by Nassar around the world under the guise of a medical treatment, including prior to the team final and vault final competitions at the Summer Olympics in 2012. Nassar is currently in prison on child pornography charges.

Maroney shared her story with the hashtag "#MeToo," which women have been using in the wake of the Harvey Weinstein allegations to share their experiences with sexual harassment and sexual assault.

In one particularly harrowing episode, Maroney said that Nassar molested her in a hotel room after arriving in Tokyo for the World Championships when she was 15. Maroney said that he had given her a sleeping pill for the flight, and that the next thing she knew she was receiving "treatment" in his hotel room.

"I thought I was going to die that night," said Maroney.

Continuing on, Maroney called for change within the sport's governing body, saying that people who are abused should not be afraid of losing their careers for speaking out. She said that there needs to be zero tolerance for anyone accused of sexual abuse and for anyone who protects them, and that people need to be educated in order to prevent these things from happening.

"Is it possible for survivors to speak out, without putting careers, and dreams in jeopardy? I hope so."

Maroney officially announced her retirement from gymnastics in an interview in February 2016. She said that she had been plagued by injuries since the London Olympics and that the environment created by USA Gymnastics was unhealthy.

In March of 2017, former USA Gymnastics President Steve Penny resigned in the wake of the Nassar scandal. He reportedly received a severance of $1 million.

Maroney is the highest-profile gymnast to publicly accuse Nassar of molestation. Olympians from the 2000 Summer Olympic Team, as well as from lower levels of the sport, have gone on record to say that Nassar sexually assaulted them during their careers.

This is an utterly heartbreaking story, and hopefully McKayla's bravery in sharing her experiences can inspire others to come forward so that this situation can never happen again.