Woman With Down Syndrome Competes in Miss Minnesota USA Pageant 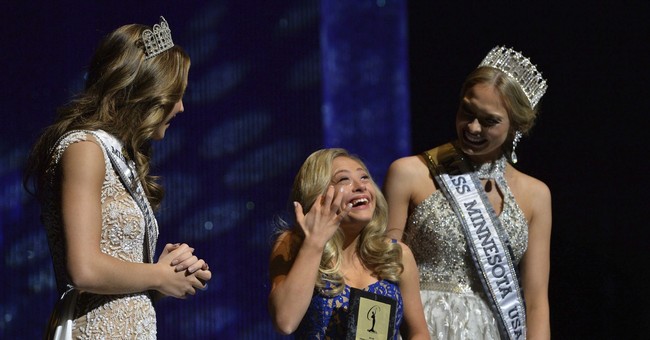 All of the competitors in this year's various Miss USA statewide pageants are beautiful and accomplished women in their own right. But one, Mikayla Holmgren, who competed in Miss Minnesota USA over the weekend, was different: she's believed to be the first woman with Down syndrome to compete in the pageant system. While she didn't win the overall crown, she did win two awards: The Spirit of Miss USA Award as well as the Director's Award.

Holmgren is a seasoned pro at pageants, and in 2015 was crowned Minnesota Junior Miss Amazing, a pageant for women with special needs. When she first received information about the Miss Minnesota USA pageant, she "bugged her mom" to let her apply. She found out she was accepted to compete this past April.

After competing, she said that she was proud of her parents for letting her do things on her own. Holmgren is a student at Bethel University's Inclusive Learning and Development program, lives on campus and is on the dance team. She'll graduate in 2018. On Facebook earlier this year, Holmgren said she wanted to be a "light shining for acceptance."

"I want to be a light shining for acceptance": Mikayla Holmgren became the first woman with Down syndrome to compete in the Miss Minnesota USA Pageant https://t.co/VbPnOoWLy1 pic.twitter.com/QYj1sANhEx

After it was reported that Holmgren would be competing in Miss Minnesota USA, other parents of daughters with Down syndrome brought their girls to the pageant to cheer her on. One, the mother of a 2-year-old, said that she found Holmgren to be inspiring and gave her hope for her own daughter.

Stories like Holmgren's should serve as a reassurance to parents facing a Down syndrome diagnosis that their children can lead fulfilling and relatively normal lives in spite of their challenges. In a world where most children diagnosed with Down syndrome are killed before they can be born, we need these stories.