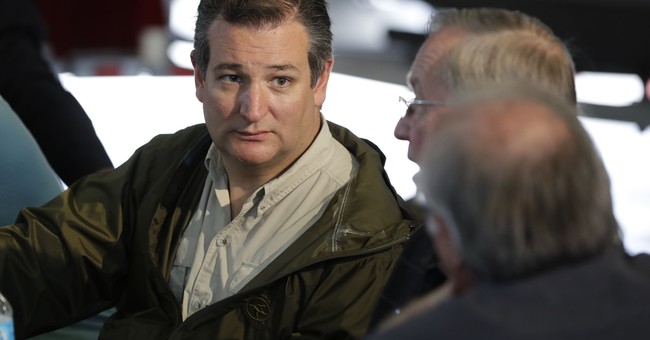 Sen. Ted Cruz (R-TX) is no longer endorsing Judge Roy Moore for Senate following additional allegations of sexual misconduct, unless Moore is able to directly prove that the accusations are not true. Cruz told this to reporters on Monday evening.

A transcript of the full interview was tweeted out by the Texas Tribune's Claire Allbright. Cruz said that he can no longer support Moore's candidacy and that he thinks Moore may be charged with a crime for his past actions. Cruz urged Moore to immediately drop out of the race unless he can somehow rebut these numerous claims.

"The people of Alabama deserve to have the option of voting for a strong conservative who has not committed criminal conduct," said Cruz.

Earlier on Monday, a woman named Beverly Nelson came forward to say that she had been assaulted by Moore when she was a teenager. She said she's willing to testify under oath that Moore attempted to shove her face into his crotch--and she's a Trump supporter to boot. (Which shouldn't matter,  but it's a fact, regardless.) She also had a yearbook that was signed by Roy Moore.

Beverly Young Nelson alleges Roy Moore “began squeezing my neck attempting to force my head into his crotch.” She was 16. pic.twitter.com/dForLnaVnp

Nelson is the fifth person to say that Moore behaved inappropriately towards her at a young age. Since these stories began to be reported, Sen. Mike Lee (R-UT) has requested that Moore stop using his image in advertisements, and many prominent Republicans have called for him to drop out of the race entirely.

The special election will be held on December 12.