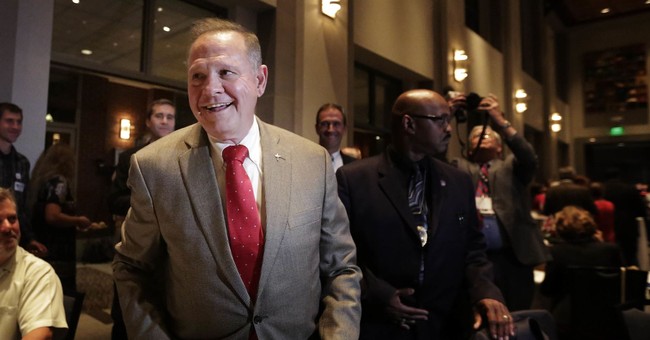 President Donald Trump has joined the growing chorus of prominent Republicans who say Alabama Senate candidate Judge Roy Moore should withdraw from the election if the allegation he sexually molested a 14-year-old girl are true.

Speaking on Air Force One, White House Press Secretary Sarah Huckabee Sanders said that while Trump thinks an allegation from years ago shouldn't destroy a person's life, if it's true, Moore should "step aside." Sanders said that this was the "right thing" for Moore to do.

“Like most Americans the president believes we cannot allow a mere allegation, in this case one from many years ago, to destroy a person’s life. However, the president also believes that if these allegations are true, Judge Moore will do the right thing and step aside."

On Thursday, the Washington Post published a bombshell report about how Moore allegedly pursued a relationship and molested a woman named Leigh Corfman when she was only 14. Moore was 32 at the time and was an assistant district attorney. Other women also came forward for the piece to say that Moore behaved inappropriately with them when they were in their late teens and he was an adult. Additional people came forward to corroborate these accounts.

Since the story was written, many Republican members of the Senate have insisted that Moore step aside from the race, and Sen. Mike Lee has ordered Moore to stop using his name and image in his campaigning. Moore's defenders have been pretty few and far between, and at one point even professed heresy in an effort to justify  his alleged actions.

Trump is right. If these are true, he should absolutely step aside and he's not fit to be in the Senate.