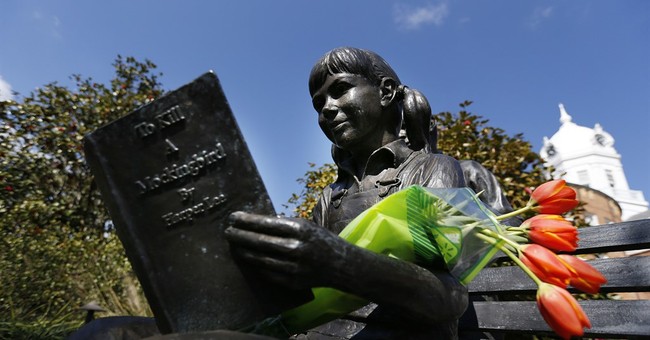 NBC has published an op-ed with a rather interesting take on the Mississippi school district's decision to eliminate the book "To Kill A Mockingbird" from its curriculum. According to the author, the book probably shouldn't be discussed in classrooms, as it could "complicate the modern 'believe victims' movement." In the book, a character named Mayella Ewell, who is white, falsely accuses Tom Robinson, who is black, of raping her. Robinson is convicted of rape even when it becomes clear he is innocent of any crime.

This, according to the op-ed, is problematic and could teach students that sometimes women lie about rape.

And the book cannot continue to be taught as if every person in the classroom is white, upper middle class and needs to be prodded into being Scout. It should be taught by asking questions about why there are no black characters with agency in the novel, by wrapping it in with the history of the Scottsboro boys — a group of black teenagers falsely accused of raping two white women — and through raising questions about how "Mockingbird" (and American history) complicates the modern “believe victims” movement.

I'll concede that there are good points in the piece--the characters aren't exactly the most developed, and it's a relatively black-and-white book (in the metaphorical sense, not literal) when the real world is much more gray. There are certainly better books out there that would probably do a better job teaching the same lessons found in "Mockingbird," but one can't ignore the book's status as an American classic.

Further, it's entirely possible to both support women who have been sexually assaulted and to read "To Kill a Mockingbird" in class. For one, "To Kill a Mockingbird" is a work of fiction. Sexual assault happens, but I hope schoolchildren are learning in a place other than an English classroom about what they should do if someone they know claims to have been sexually assaulted. It's also the sad truth that people sometimes lie about these things. (But again, English class isn't exactly the place where this discussion should be happening.) Treat fiction like fiction, not as a guide for life.

Rebecca Downs
The Chinese Communist Party Goes After a Sitting Member of Congress, and He Responds in the Best Way
Rebecca Downs
Biden Reminds Gun Owners the Government Has Nuclear Weapons
Katie Pavlich
Al Sharpton Made a Solid Observation About Race Relations and Latte-Drinking Libs Who Are Obsessed About It
Matt Vespa
John McAfee Found Dead in Prison Cell Hours After Court Ruled in Favor of Extraditing to US
Rebecca Downs
CARTOONS | Tom Stiglich
View Cartoon
Most Popular