Sen. Susan Collins to Announce on Friday if She's Running for Governor 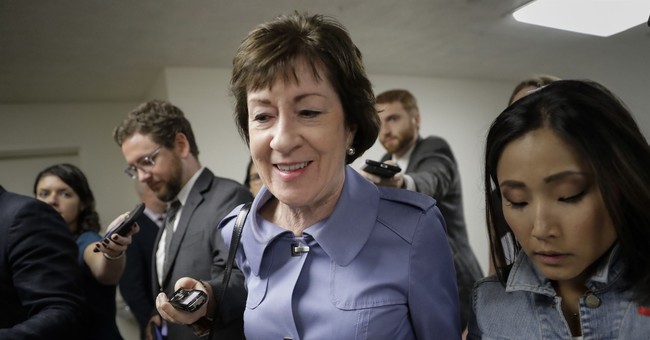 Sen. Susan Collins (R-ME) will announce her decision on a 2018 gubernatorial run on Friday, her spokeswoman said on Tuesday. Collins, who has spent more than two decades in the Senate, has been mulling over the idea of a gubernatorial run for quite some time. If she were to run, she would not have to give up her Senate seat as she is not up for reelection until 2020.

Collins last ran for governor in 1994, losing to now-Sen. Angus King (I-ME), who ran as an independent.

Despite being one of the most popular senators in the country, she may not have the easiest time in a run for the Blaine House. A recent poll showed that among Republicans in Maine, Collins was not the front-runner in a theoretical Republican primary, and that many Maine Republicans would rather vote for someone more conservative than Collins. Right now, the three declared GOP candidates are far less centrist than Collins.

Still, Collins has shown that she is able to sway votes on a statewide scale, and name recognition isn't something to dismiss outright. In 2014, she was easily reelected to the Senate by more than 35 points, whereas outspoken conservative Gov. Paul LePage (R) was reelected as governor on the same night by a relatively small margin and did not garner more than 50 percent of the vote in a three-way race. Collins clearly has something going for her, even if surviving the primary is a challenge.

In other Maine politics news, Gov. LePage has ruled out a 2018 Senate run against incumbent Sen. King, but rumors are swirling that his wife, Ann, may enter the ring herself. Maine's First Lady does not have any political experience herself, but certainly has a gentler public image than that of her husband.