Uh-oh: Is Susan Collins in Trouble? 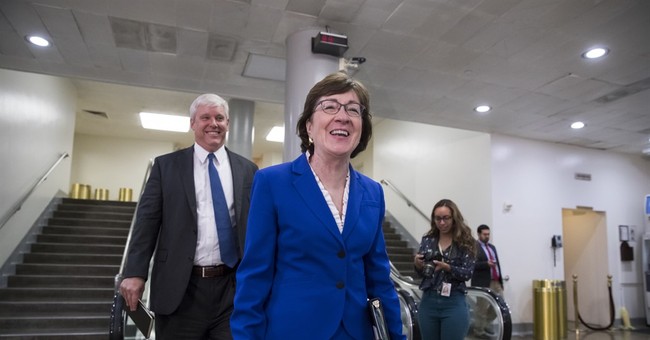 Sen. Susan Collins (R-ME) has historically been very popular in Maine. She was reelected to the Senate in 2014 by the eye-popping margin of 37 points--the same election which saw conservative Republican Gov. Paul LePage only garner 48 percent of the same electorate. While she's not exactly popular on a national scale due to her centrist tendencies, Mainers seem to like her just fine--until now, maybe.

Although Collins isn't up for reelection to the Senate until 2020, there's been quite a bit of chatter that she may make a run for the Blaine House after Gov. Paul LePage is term-limited in 2018 and cannot run again. Collins previously ran for governor in 1994, losing to the now-Sen. Angus King (I-ME). Given her relative popularity in Maine, one would think that she’d be a relative shoo-in for the position, but an interesting new poll is casting doubt on if she’d even make it past the primary.

Granted, this poll has its issues. Per the Bangor Daily News, PPP wouldn't reveal who funded the poll--which means that it could potentially be a Democrat group seeking to weed out stronger Republican candidates. Also, it's still incredibly early--the primary won't even be held until next June. But still, these are things that are worth thinking about.

Recommended
The Conservative Populist Coalition Has Grown in Pennsylvania. What That Means Going Forward Is Important
Salena Zito

If these results hold true in other polls, it seems to make the most sense for Collins to simply stay put in the Senate--or, if she even decides to run for governor, run as an independent. However, there's still a whole lot of time until June, and there's a whole lot of things that could change.