Was Someone Else in Las Vegas Shooter's Room? 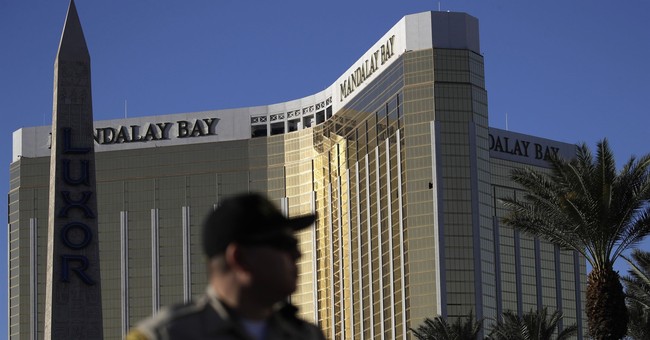 Five days after the massacre in Las Vegas left 59 people dead and over 500 injured, it almost seems as though there are more questions than answers. ISIS continues to insist he's one of them, yet the FBI says otherwise. It's still entirely unclear as to what shooter Stephen Paddock's motive was in the attack.

The biggest question, and one that may actually have an answer, however, is "did Paddock have help, and if so, who?"

Las Vegas Sheriff Joe Lombardo said that he presumed that Paddock had some sort of assistance, due to the sheer complexity of the attack. Now, evidence is mounting that someone was likely in the room with Paddock for at least part of the time prior to the massacre.

A hotel receipt unearthed two days after the attack seemed to indicate that there were multiple people in room 32135 of the Mandalay Bay Resort. The receipt was for a burger and a bagel, plus a soup and two sodas. The receipt says that the order was for two guests and was charged to the hotel room Paddock stayed in during the attack.

Additionally, authorities found a phone charger in the room that was not compatible with any of Paddock's phones, and a key was used to enter his hotel room during a time his car was not in the hotel's garage. It's possible that the charger could have been left behind by a guest prior to Paddock checking in, but it seems unlikely that the housekeeping staff would have missed that. The use of the key card when he wasn't at the hotel seems a bit stranger, but could have an entirely innocent explanation as well.

One would think that there would be some kind of security footage present that would show people going in and out of the elevator on the 32nd floor. It's possible that authorities are still trying to discern just exactly what happened before making any kind of announcement, which is probably prudent. But still, it's strange that things are taking this long.