No, A Seattle Seahawks Player Did Not Burn the Flag in the Locker Room 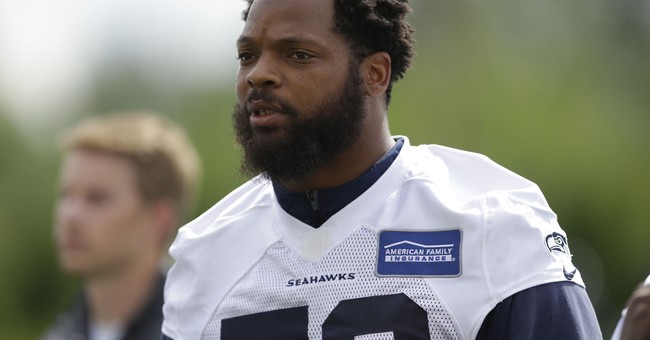 An image of Michael Bennett, an NFL player with the Seattle Seahawks, standing in the locker room burning the American flag was shared by a pro-Trump Facebook group and has been shared on Facebook thousands of times. One small issue: it's completely untrue and an entirely fake picture. The image was shared by the "Vets for Trump" page.

The lack of smoke, coupled with the fact that the sprinkler system isn't going off despite the "fire," and the overall poor quality of the edit makes it obvious that this picture isn't real. Still, it's been shared by nearly 5,000 people, with the majority making no comment that the image is fake. The original image comes from 2015 and was taken after a Seahawks victory.

This type of inflammatory rhetoric is completely unneeded and does nothing to try to heal the divide currently in the United States. It's not helping anything, and all it's doing is stoking more resentment. This isn't good, and whoever runs that page should be ashamed for sharing such an obviously fake image. This is unacceptable behavior.