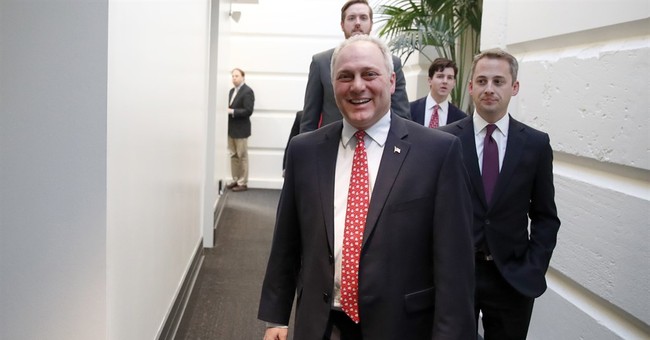 Some happy hump-day news: more than a month after he was shot and nearly killed while at baseball practice for the Congressional Baseball Game, Majority Whip Steve Scalise (R-LA) has been discharged from MedStar Washington Hospital Center and has entered an inpatient rehabilitation program. Scalise was discharged on Tuesday.

A statement from MedStar said that Scalise has made "excellent" progress and is in "good spirits." He expects to return to work once he has finished with rehab.

Congressman Steve Scalise has made excellent progress in his recovery from a life-threatening gunshot wound six weeks ago.  Yesterday, he was discharged from MedStar Washington Hospital Center and is now beginning a period of intensive inpatient rehabilitation. He is in good spirits and is looking forward to his return to work once he completes rehabilitation. He and his family are grateful for the care he received from the trauma team as well as the other doctors, nurses, and staff of MedStar Washington Hospital Center. The family also appreciates the outpouring of prayers and support during this time.

Scalise was the most severely injured in the June 14 attack on members of the GOP's baseball team. He was shot through the hip by James T. Hodgkinson, a former volunteer on Sen. Bernie Sanders' (I-VT) presidential campaign who had a history of saying he sought to destroy Republicans and President Donald Trump. Hodgkinson was killed on the scene by members of Scalise's security detail. Scalise suffered injuries to his internal organs and pelvis and spent weeks in the ICU.

There was an outpouring of bipartisanship in reaction to the shooting. The Democrats invited the Republican baseball team to dinner on the eve of the game, and both teams prayed together before the game began. The Congressional Baseball Game raised a record amount of money for its charitable organizations.