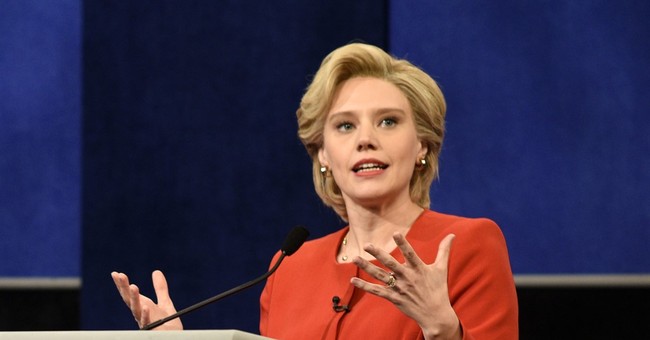 In her new book "What Happened," Hillary Clinton revealed that she was "blinking back tears" at "Saturday Night Live" comedian Kate McKinnon's performance of "Hallelujah" the Saturday after she lost the presidential election to Donald Trump. McKinnon performed the song partly in tribute to Clinton's loss as well as memorializing singer Leonard Cohen, who passed away two days after the election. McKinnon was dressed as Clinton and portrayed her on the show throughout the campaign.

Clinton said in her book that she tuned in to SNL that night, and said that she was deeply moved by McKinnon's performance, to the point of almost crying.

“As she sang, it seemed like she was fighting back tears. Listening, so was I,” Clinton wrote in her book.

Here's the clip, if you've never seen it:

On Sunday, things came full circle as McKinnon was awarded an Emmy for her work on SNL this past season. In her acceptance speech, she thanked Clinton for her "grace and grit."

Congrats to Kate McKinnon for being an almost better Hillary Clinton than Clinton herself.