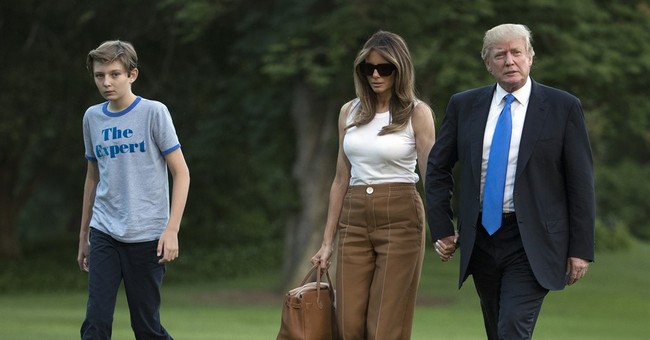 I've written before about the unique, fiercely protective, bonds shared by the children who grow up in the White House, and it looks as though this bond will be extended to Barron Trump. On Twitter on Monday, former First Daughter Chelsea Clinton defended Barron against an article that accused him of not properly dressing for someone who lives in the White House, a gesture that was appreciated by First Lady Melania Trump.

Dear Matty-Barron is A KID. No child should be talked about in the below manner-in real life or online. And for an adult to do so? For shame https://t.co/p9jkGbMG4C

Melania Trump thanked Clinton for standing up for her child. Barron is 11 years old and does not have any public social media accounts. One of Melania Trump's major focuses as First Lady has been to combat bullying, particularly cyberbullying.

Thank you @ChelseaClinton - so important to support all of our children in being themselves! #StopChildhoodBullying https://t.co/UCUpFc5ZjR

Barron has not received the kindest treatment since his father was elected. Shortly after Election Day, Rosie O'Donnell said that she believed Barron was autistic due to his demeanor on stage during his father's victory speech. He was also called a "special needs kid" when he was spotted with a fidget spinner (which was the trendiest toy in the country at the time) at the White House, and a "Saturday Night Live" writer was suspended after she called Barron the "country's first homeschool shooter." The writer then apologized.

During the Obama era, it was generally agreed that Sasha and Malia were off limits and were to be left alone.  Barron should be given the same treatment.

'Nope! Done': Tucker Shuts Down Interview with Ed Gavin
Townhall
LeBron James says he took down his 'YOU'RE NEXT' tweet because it was 'being used to create more hate'
Twitchy
The Newsom Recall Is on Like Donkey Kong
Redstate
Portland's Black Leaders Ask Woke White Folk to Stop Ruining Things
PJ Media