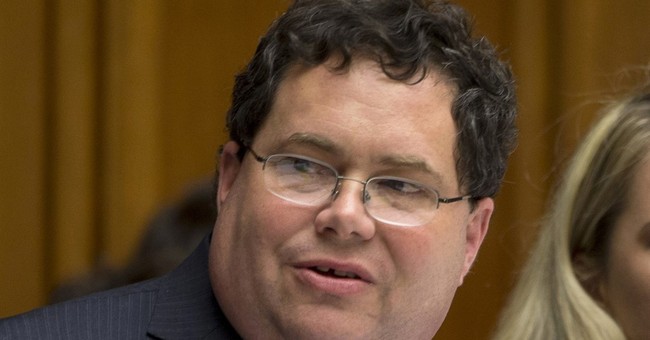 Rep. Blake Farenthold (R-TX) was slammed for comments made Monday on a radio show where he blamed "female senators" from the Northeast for why there had not been progress made on the healthcare bill. Farenthold then said that had the senators been male, he would have challenged them to a duel "Aaron Burr-style," but he wouldn't. (How chivalrous?)

"Listen, the fact that the Senate does not have the courage to do some of the things that every Republican in the Senate promised to do is just absolutely repugnant to me," he told Texas radio host Bob Jones on "Keys 1440 AM." "Some of the people that are opposed to this -- there are some female senators from the Northeast -- if it was a guy from South Texas, I might ask him to step outside and settle this Aaron Burr-style."

Despite Farenthold's claim that it's "female senators from the Northeast" who are primarily the obstacle to appealing Obamacare, the only person who fits this descriptor is Sen. Susan Collins (R-ME). (While Sen. Shelly Moore Capito is also a female who is against the proposed bill, West Virginia is not the northeast in the view of this author, and Sen. Lisa Murkowski's (R-AK) home state is definitely not the northeast.) Sens. Rand Paul (R-KY), Ron Johnson (R-WI), Mike Lee (R-UT), and Ted Cruz (R-TX) are similarly opposed to various appeal legislation, and they're all males from outside the northeast, so it's odd that Farenthold landed primarily on Collins as his dueling target.

The pile-on came from both sides of the aisle, as well as from the media.

Blake Farenthold is the rare lawmaker who is precisely as dumb as he looks.

I can't see Lisa Murkowski losing a duel with Blake Farenthold tbh, even if her weapon jammed

I'm pretty confident any of those women could beat Blake Farenthold in a duel, or a fist fight, or whatever. https://t.co/SIaZk2KUmQ

Maybe leave the violent jokes out of policy discussions.