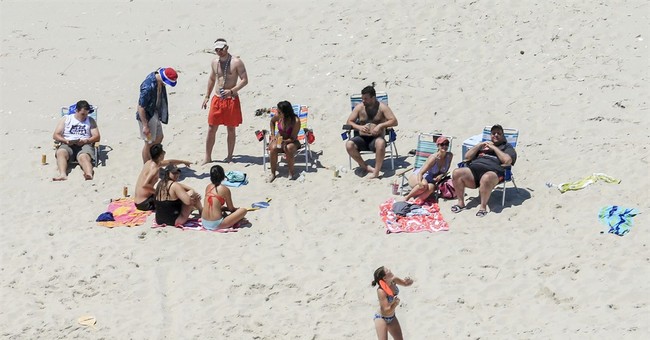 New Jersey Gov. Chris Christie came under fire on Sunday for going to a beach that was closed to the public in the midst of the state's government shutdown. Christie and his family sunbathed at Island Beach State Park and were spotted via a plane booked by NJ Advance Media. All state parks have been closed as a result of the shutdown.

The plane was originally booked to take pictures of people celebrating the Fourth of July on crowded beaches, compared to the now-closed public parks. Instead, they happened upon Gov. Christie.

Originally, NJ Advance Media had booked a plane for the Fourth of July. The plan was to fly along the Jersey Shore on the holiday and shoot the crowded beaches, juxtaposed with the empty stretches of sand that were off-limits because of the government shutdown, if it were still in effect.

Breathtaking - but exasperating - photos for our readers and New Jersey taxpayers.

But when Sunday's weather looked good, and the governor's schedule was open except for an afternoon press briefing in Trenton, I wondered, "What are the chances ...?"

Now, because this is the internet and it's 2017 (plus Christie is still the most unpopular governor in the country by a whole lot), the image of Christie sitting in a beach chair was quickly turned into a meme.

We don't just take away healthcare from the American people, we take away the beaches too. Happy 4th of July from the GOP. #ChrisChristie pic.twitter.com/fEMIhhMEL6

This is perfection. I was saying yesterday that #ChrisChristie had all the sociopathic tendencies of Tony Soprano without ANY of the charm. pic.twitter.com/CzE3dqpTqE

When you're #ChrisChristie, in your last term: you #dgaf pic.twitter.com/Y2lLw3JtXf

Even Christie's Lt. Gov. Kim Guadagno (R) was upset by the whole situation, calling it "beyond words." In a tweet, she said that if she were governor, she certainly wouldn't be sitting on a beach if taxpayers couldn't access other state beaches.

It’s beyond words. If I were gov, sure wouldn’t be sitting on beach if taxpayers didn’t have access to state beaches https://t.co/VBtBpoUUkv

I mean, holy cow. This is like a textbook case of "bad optics"--it's hard to get much worse than this. Granted, he's term-limited and in the waning months of his governorship, but man, he seems as though he actually wants people to despise him.