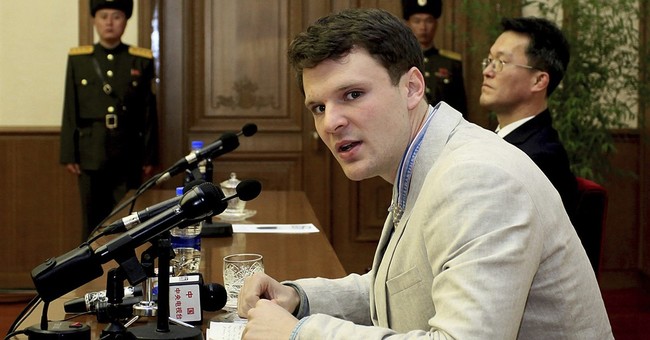 Cortney wrote earlier about how University of Virginia student Otto Warmbier has been released from North Korea. Now, there's a horrific update to this already-sad case: Warmbier has been in a coma for over a year after he contracted Botulism. According to North Korean officials, he was given a sleeping pill as part of the treatment and has not awoken since. Warmbier was last seen in public in March 2016, when he was sentenced to 15 years of hard labor after an hour-long trial. Warmbier was accused of stealing a propaganda sign from a hotel.

Warmbier's parents confirmed that he is in a coma on Tuesday. They said they only learned of his medical state about a week ago.

BREAKING: American student released by North Korea has been in a coma for over a year, his parents say https://t.co/ilqyAjIUap pic.twitter.com/i7kHwrjtu5
— CNN (@CNN) June 13, 2017

He was charged with “hostile acts against the state,” and after an hour-long trial in March 2016, he was sentenced to 15 years in prison with hard labor.
He had not been seen in public since. Swedish diplomats, who represent U.S. interests in North Korea because the United States has no diplomatic relations with the country, were denied access to him.
Then suddenly, last Monday, North Korean representatives contacted American counterparts and told them that student was in a coma.

Per WaPo, President Trump started efforts to evacuate Warmbier from the country once he became aware of his medical condition. Warmbier is being evacuated on a military plane. It is unknown what kind of medical care he received while in North Korea.

Warmbier was visiting North Korea prior to a planned semester abroad in Hong Kong.