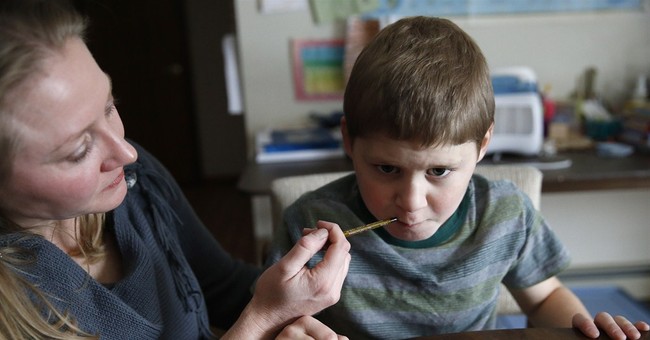 The DEA is pressing on in its seemingly never-ending battle to make the lives of already medically-fragile children even harder.

In a new announcement, the organization has classified CBD oil, which is derived from cannabis, as a Schedule I narcotic with no medicinal use. CBD oil is used by a variety of people for treating illnesses--most notably for treating seizure disorders. Now, CBD oil is classified on the same level as heroin, LSD, and meth.

The DEA published the details about the change in the Federal Register.

It applies to any "extract containing one or more cannabinoids that has been derived from any plant of the genus Cannabis," the Federal Register posting said.

The change explains that the DEA is creating a new Administrative Controlled Substances Code Number for what it calls "Marihuana [sic] Extract."

During the comment period for the new rule, one person asked for clarification of whether the new drug code would be applicable to cannabidiol (CBD).

This is absolutely absurd. Nobody does CBD oil recreationally. It is not addictive. The potential for abuse is zero. A person cannot get high from CBD oil as it does not have psychoactive properties. The component in marijuana that creates the "high" is THC, not CBD. Heck, the original name of the "Charlotte's Web" strain of cannabis that the oil is derived from was "Hippie's Disappointment," because it does not make a person high. (It was then re-named after Charlotte Figi, a child with Dravet syndrome, who went from having hundreds of seizures a week to four a month after beginning a regimen with CBD oil.) It is insane that the DEA can classify CBD oil as having "no currently acceptable medicinal use" and with a "high potential for abuse." Neither of these things are true.

More than half of the states in the U.S. have legalized some form of medicinal marijuana, and a few have legalized only CBD oil for medicinal purposes. Families are willing to uproot their lives to move to a place where CBD oil is legal. These people are not using the drug for fun--they're using it to save their lives. Medical marijuana patients aren't junkies and drug addicts, and their medicine shouldn't be classified as such. The DEA nees to reverse this, pronto.