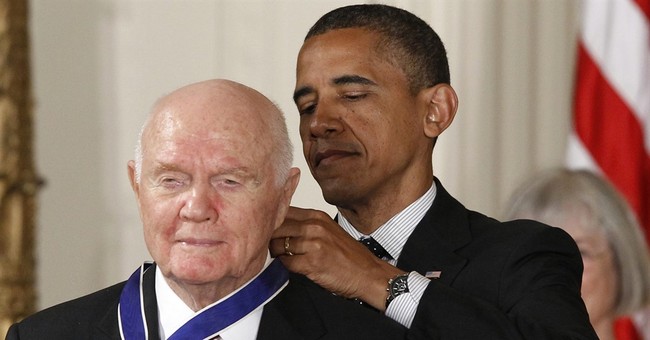 John Glenn, a former U.S. senator and the first American to orbit the earth, died today at the age of 95. Here are some of the ways people honored this American hero:

Today we lost a great pioneer of air and space in John Glenn. He was a hero and inspired generations of future explorers. He will be missed.

Saddened to hear of the passing of a US hero/astronaut/statesman. His courage inspired a generation to explore & serve. Godspeed John Glenn

We are saddened by the loss of Sen. John Glenn, the first American to orbit Earth. A true American hero. Godspeed, John Glenn. Ad astra. pic.twitter.com/89idi9r1NB

The Corps lost a legend today.

Col. John Glenn— an astronaut, a senator, a Marine— died at the age of 95.

Former US Senator #JohnGlenn was a true hero. May he rest in the heavenly stars.