The OSU "Shooting" Wasn't Actually A Shooting, But That Didn't Stop Gun Control Supporters From Politicizing It 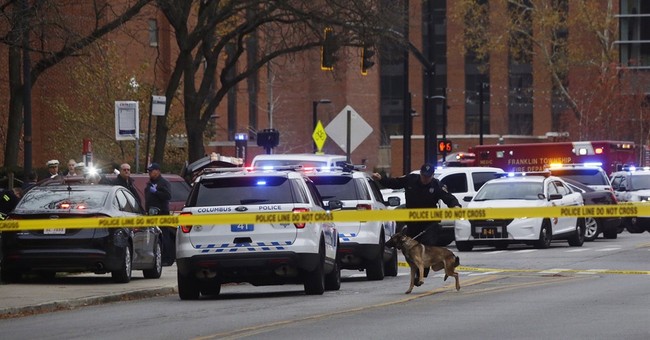 First things first: our prayers are with the Ohio State University community on this very, very scary day. Best wishes to everyone injured in the attack for a speedy and complete recovery.

Second: Perhaps it's best to wait just a little bit for facts to come out before politicizing an event.

Exhibit A: Shannon Watts of Mom's Demand Action for Gun Sense in America, who wasted zero time before pushing a gun control agenda shortly after reports broke of an active shooter on campus.  Watts tweeted a picture of a classroom at OSU with the door barricaded, and said that there needs to be more gun laws in America.

As it would turn out, the active shooter reports from campus were wrong, and the gunshots students heard were likely the police taking out the assailant, who was shot and killed. Eyewitness reports from the scene described the assailant as a man with a "big-ass knife" who initially ran down a group of students with a car.

In situations like this one, the first reports from the scene are often incorrect due to the chaotic environment. This is perfectly understandable and cannot be avoided. What can be avoided, however, is making a cheap political stunt before we even know what is happening. Increased gun control laws wouldn't have stopped a man from running down a group of students with his car and then attacking people with a knife.