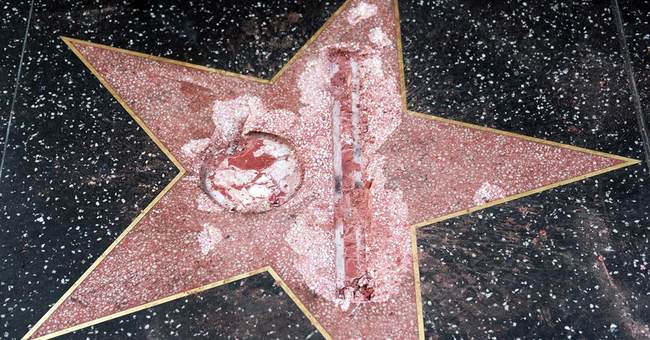 The man who destroyed Donald Trump's star on the Hollywood Walk of Fame prior to Election Day has been charged with a felony. While Trump's star had repeatedly been vandalized throughout the election, this damage was different as the star was shattered by a sledgehammer and the damage could not be easily fixed.

The vandal, James Otis, faces one count of felony vandalism causing more than $400 in damage. He was arrested the day after smashing the star. Otis said that he was motivated by Trump's comments about women to attack the star.

Otis said he had disdain for Trump and his attitude toward women.

“I just sort of had enough with Mr. Trump’s aggressive language toward women and his behavior, his sexual violence with women and against women,” Otis said. “I’ve had personally in my own family four people who have been assaulted or have had sexual violence happen to them. It all became very personal.”

Trump has called such accusations false.

After smashing the star, Otis removed the center TV emblem, some letters of Trump’s name and a small piece of the star. He kept the brass pieces.

Otis said he planned to auction them off and raise money for women who accused Trump of assault as well as a college organization working to end sexual violence on campuses.

Otis faces up to three years in prison for destroying the star.

Hey, Dems, You Won't Have to Dig Deep to Get to the Bottom of the National Guard's Eviction at US Capitol
Townhall
'We cannot become numb to this'! @redsteeze puts COVID19 deaths on President Joe Biden's watch into devastating perspective
Twitchy
Opinion: Great Move NRO; You Just Insulted 75 MILLION Americans
Redstate
Insanity Wrap #130: One Day With Joe Biden and Everything Has Gone to Hell Already
PJ Media