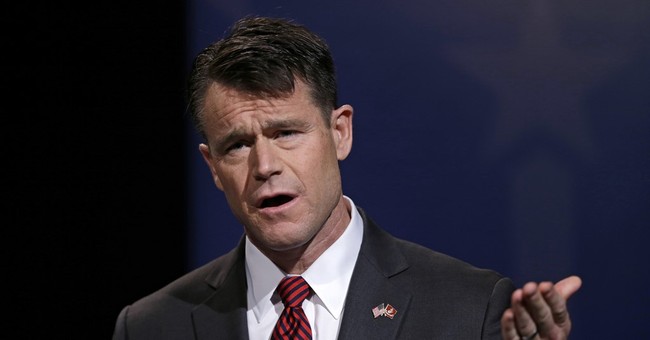 As Election Day draws near, it's looking as though the Indiana Senate race is going to go down to the wire between Democrat Evan Bayh and Republican Todd Young. Both are looking to fill the seat vacated by the retiring Sen. Dan Coats (R), who announced in 2015 that he was not going to seek reelection.

Who is Evan Bayh?: Bayh, a Democrat, served in the Senate from 1999 until 2011. He did not run for reelection in 2010 and was replaced by Republican Dan Coats. Prior to his time in the Senate, he served as Governor of Indiana from 1989 until 1997, and was the Secretary of State of Indiana from 1986 until 1989. Bayh was on the shortlist to become Barack Obama's running mate in 2008. His father, Birch Bayh, was also a senator from Indiana.

Who is Todd Young?: Young, a Republican, has represented Indiana in the House of Representatives since 2011. Prior to his career in politics, he served in the U.S. Marine Corps and was discharged in 2000. He is a graduate of the United States Naval Academy.

What are the polls saying?: The polls have been all over the place on this one. Until recently, Bayh had a small, but significant, lead over Young, which has all but collapsed in recent weeks. The most recent poll has Young up five, but it's unclear if this is a statistical outlier. Over at RealClearPolitics, Young is averaging less than one point ahead of Bayh. FiveThirtyEight is projecting a Young victory, but with a very close race.

Prediction: Young, but by the skin of his teeth. This one probably won't be called until the wee hours of the morning.