The "Redskins Rule" Predicts That Clinton Will Win This November 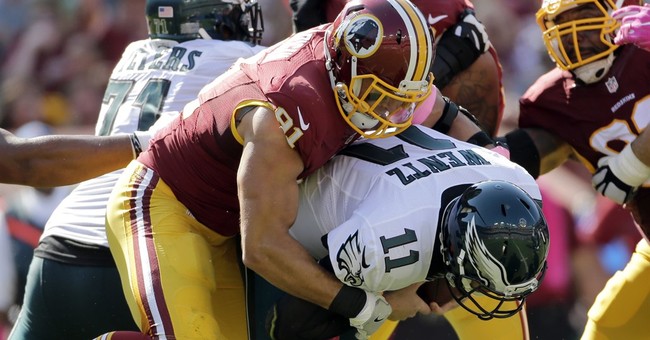 On Sunday, the Redskins were victorious over the Philadelphia Eagles--which could be a sign that Hillary Clinton will defeat Donald Trump this November.

If the "Redskins Rule" is to be believed, the Redskins victory on their final home game prior to Election Day means that the Democratic Party will maintain control of the White House. While this sounds ridiculous, this "rule" has only been wrong twice since 1940, the first presidential election with the team back in Washington. The Redskins lost in 2004 and 2012, yet both incumbents were re-elected.

The "Redskins Rule" first burst on to the scene in 2000, when sportswriter Steve Hirdt noticed that the results of the final Redskins' home game before Election Day was remarkably accurate and predicting the electoral results.

“I started looking through the Redskins’ press guide where they list all the scores in the back,” Hirdt recalls. “I was making a list of the last home game before the election because that was the game we were covering. I tried to align it with the Democrats or the Republicans and then looked at the incumbents.

While this is about the least-scientific "poll" of all time, it's still kind of cool how accurate the "rule" has been over the past seven decades. If Clinton were to defeat Trump, the rule would have an overall record of 18 correct guesses in 20 attempts--which is a fairly dependable record.

Will the rule be correct once again? We'll find out in a few short weeks.