Someone Painted A Mural of Maine Gov. Paul LePage As A Klansman. You Won't Believe What Happened Next. 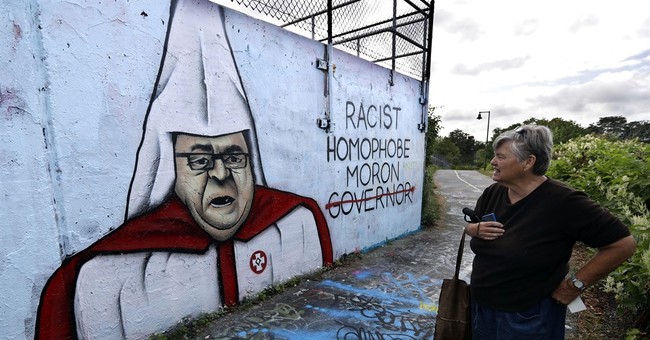 Earlier this week, a mural depicting Maine Gov. Paul LePage (R) in a KKK hood and robe appeared in the city of Portland. Despite pleas from the mayor, the city said that they would not be removing it as the wall it was painted on was a designated art space. Gov. LePage has been under fire for the past several weeks after he made a series of inflammatory comments regarding the possible ethnicities of drug traffickers in the state. There was an attempt for a possible special session to discuss removing LePage from the governorship, but that failed.

Some industrious people took matters in to their own hands, and decided to clean up the mural themselves. Now, instead of a hood, LePage is sporting a pair of Mickey Mouse ears. Additionally, someone painted the phrases "no hate" and "hate is hate."

A graffiti mural of LePage originally had him dressed as a KKK leader, but this morning he has Mickey ears. pic.twitter.com/ymb3QMJfPS

Portland's mayor said that while he does not agree with much of LePage's rhetoric, he does not think it is appropriate to "trivialize" the KKK.

“I do not want it up there. It is not reflective of our values,” Strimling said Tuesday. “The KKK has a long, problematic history in the state of Maine, and equating the governor and his rhetoric, as much as we disagree with it, is a step too far.”

The KKK was active in Maine during the 1920s, and primarily targeted Catholic immigrants and Franco-Americans. LePage is Maine's first Franco-American governor.