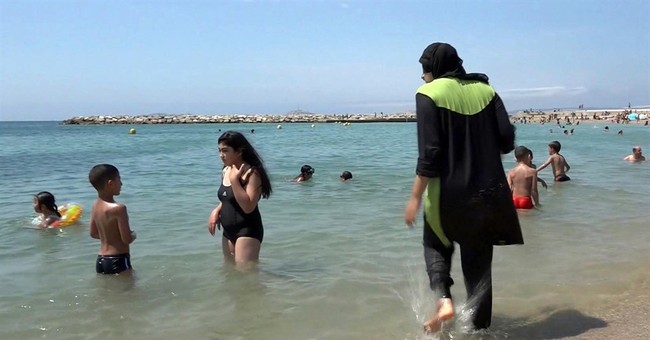 France's highest court has ruled that towns do not have the right to ban women from wearing "burkinis" at beaches. Over 30 French towns had banned the garment from beaches due to terror concerns.

The full face-covering burqa veil, as well as niqabs, are already prohibited in France. The "burkini" does not cover the wearer's face, but rather resembles a wetsuit with a longer shirt. Headscarves and other religious clothing cannot be worn in French public schools.

An image of a woman being forced by police to remove part of her bathing suit went viral, sparking outrage about the ban.

French ban on the burkini is threatening to turn into a farce https://t.co/rsuk2iajqO pic.twitter.com/OssfVGrP9Q

Honestly, this is probably a good thing. A woman wearing an extremely modest bathing suit is not a security threat--her face is visible and she can be easily identified. This is very different from a burqa or niqab, which would be another conversation altogether. The police should have more important things to do than patrol women's clothing.