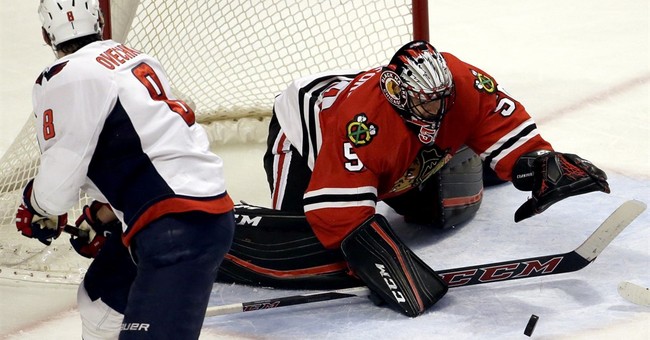 Chicago Blackhawks goaltender Corey Crawford knows a thing or two about the importance of chest protection. As a goalie, he's taking pucks to the chest all night long on game day. That's why he's appearing in an ad campaign to raise money to buy new bulletproof vests to outfit Chicago's police officers. The "Get Behind The Vest" drive hopes to purchase about 2,000 new vests for officers.

In a joint press conference with the Chicago Police Memorial Foundation on Tuesday, the Blackhawks also announced plans to donate $5,000 this week to the "Get Behind The Vest" drive, which has already provided more than 6,100 replacement vests since the fall of 2014.

The foundation hopes a renewed push this week will help supplement the cost of their previously stated goal of 8,000 bulletproof vests.

The Blackhawks will also donate $5,000 to the drive.

In light of police officers boycotting WNBA games after players made comments construed as anti-cop, it's nice to see at least one sports team work to ensure that officers are safe.