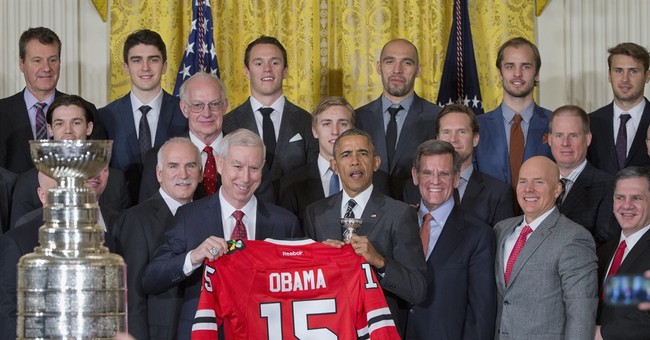 2015 Stanley Cup Champions Chicago Blackhawks visited the White House on Thursday in celebration of their victory over the Tampa Bay Lightning this past June.

President Obama called the Stanley Cup the "best trophy in sports" and said that he was happy that a Chicago team was winning championships. He was given a lifetime parking pass to the United Center, the Blackhawks home rink, and it was joked that he should catch a game during his upcoming free time after his term is over.

When the President says he wants his own day with the best trophy in sports, the #StanleyCup. #WeFeelYouPOTUS

"I’ll admit I was hoping you’d give me a day with it this time around. Before I was president, I just want to point out ... the Blackhawks had gone almost half a century without seeing this thing. Now you’ve got the hat trick. So I think it's pretty clear the kind of luck I've brought to this team."

Miss any of today's ceremony at the @WhiteHouse?